Should You Fire This Newsletter?

In which I analyze whether I’m good at my job

This essay is brought to you by Sunsama, your planning assistant designed for deep, focused work.

The value of a piece of analysis is threefold:

Technology newsletter writers compete on their ability to deliver value along these dimensions. I’m worried I’m bad at all three.

Part of me knows this is irrational. I’m one of the very few human beings on the planet whose bills are paid via the written word. “Napkin Math” and my public profile continue to grow, and I should have every reason to be confident in what I’ve done over the last year. My dad has even stopped telling me to go back to school to get my Master’s degree.

Nevertheless, the feelings of inadequacy won’t go away. Self-doubt and anxiety are my closest companions. Some weeks I’m physically sick with worry. On bad days, I can’t look at a Google Doc without my skin getting clammy. As a sign of God’s twisted sense of humor, these feelings have only intensified the more successful I’ve become. I had no concern about my ability when I was writing for my initial audience of 30 random readers. Now that thousands of people pay for this newsletter, I somehow feel like I’ve gotten worse.

The healthy way to dissuade this feeling is probably therapy, maybe drugs. Instead, I’ve chosen public self-flagellation. Accordingly, this post is the "Napkin Math" on whether I’m good at my job. I’ll go through my predictions for the last year, score their accuracy, and see what I got wrong.

I believe that all writers should do this exercise. Being accountable to the audience on whether the product they are paying for is worthwhile. Too many writers skate by on reputation and cultural cache. My goal is that you pay me for accuracy. This post is about whether the investment is worth it.

To prepare for this piece, I read everything I’ve written over the last 18 months and scored myself from 1-20 on the accuracy of the forecasts I made. A 1 is terrible, awful, the government saying inflation is temporary, Scott Galloway saying-anything-levels-of-inaccuracy. A 20 is a godlike, 100% correct forecast.

Mondays can be rough, especially when you're logging into work and you are suddenly overwhelmed with Slack messages, e-mails, calendar invites, and other work-related notifications. Sunsama is here to carry the load and help you focus on what matters. It's a planning assistant designed for deep work. It integrates with the tools you already use like Notion, Slack, and Gmail so you can just drag and drop any task to plan your focused work sessions.

Thousands of high achievers at Uber, Spotify, and other get-stuff-done companies use Sunsama every day to get a focused view of everything they need to accomplish across every tool they use and create a better work-life balance. 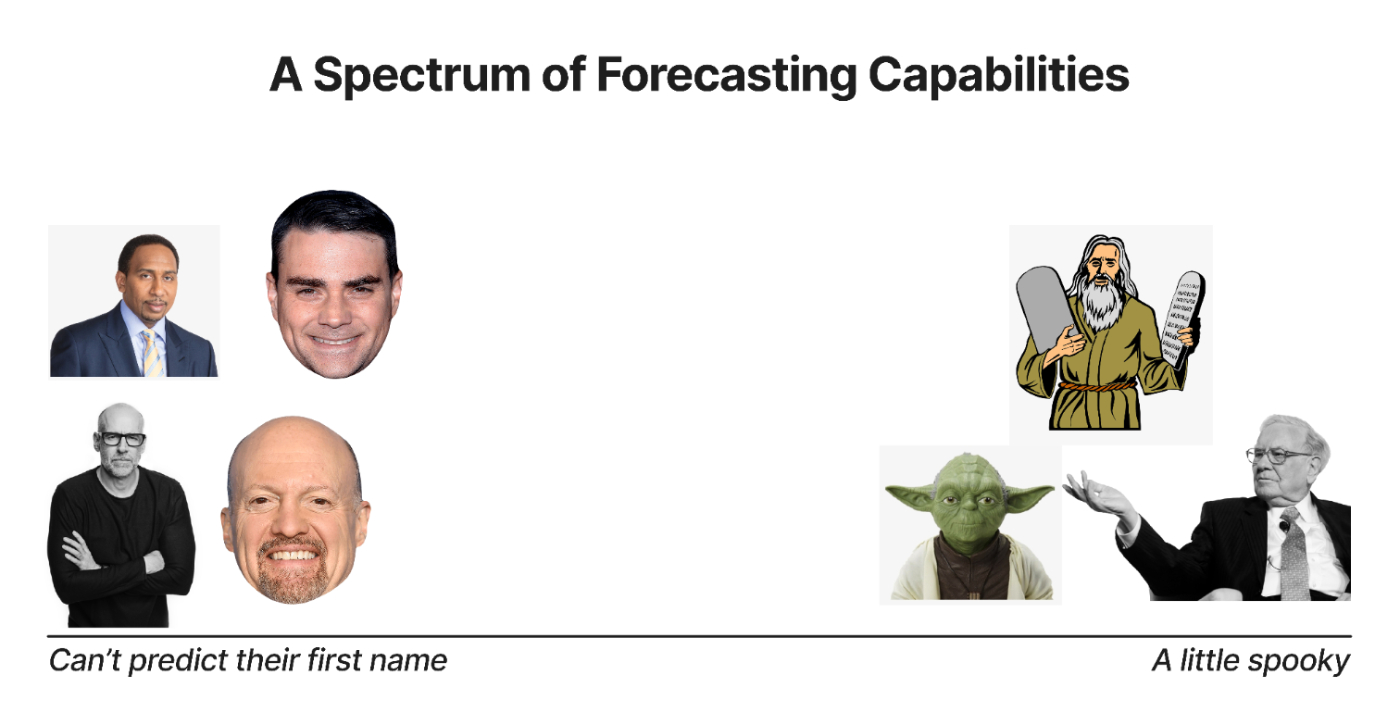 I’d estimate that a lifetime average score of 12 is the minimum acceptable level of performance for a newsletter writer. My hope was for 15. If I got a result below 9, I was going to quit and go back to the farm. The analysis looked something like this:

Here’s the complete analysis of the 20 predictions I analyzed.

The results were surprising. I got a 16.45 average and 17.5 median, which translates to a roughly 80% accuracy rate on my calls. Not bad! My analysis would suggest that I’m not terrible at what I do.

My best and worst calls

There were, however, some things I got very wrong:

Most of the other things that I got wrong were a few degrees removed from reality, not totally departed from it. On the win side I had some fun ones:

Even with these wins, I worry there is a bigger issue with my work: I don’t have skin in the game.

Evan, sort of a fraud

Every Thursday night, I put my feet up on the couch and prepare to yell. That sacred evening is football night. “A slant??” “Spike it! Spike it!” My armchair quarterbacking is entertaining but ultimately pointless. I’m not playing the game; I’m not the man in the arena.

Doing this analysis kind of made me feel the same way. I am an accurate strategy forecaster if you ignore pricing. I have never deployed capital as a result of my analysis. Almost all of my personal capital I deploy into index funds. I write these posts because I’m interested, not invested.

That’s not necessarily a bad thing. Napkin Math would be a worse newsletter if I just talked about my book, which is a problem I’ve encountered with newsletters that also manage an active portfolio. By not having a fund I avoid any conflict of interest. That being said, if I really believe that I’m good at picking technology companies, I should probably raise some sort of investment vehicle. Many of my newsletter writer friends with a similar-sized audience have $10-20M funds; it wouldn’t be unreasonable for me to do the same.

For now, I’m comfortable with my strategy. Raising a fund would distract me from writing, which is my obsession right now. However, for future stock analysis, I should fold in more math around pricing and valuation. Good note for 2023!

Perhaps the most surprising outcome of my analysis was that there was no relationship between how viral a post was and its accuracy. Some of my most intelligent, spooky-good analyses barely got read, while some of my dumbest takes got shared all over the world.

As far as I can tell, my pieces’ virality is driven by my ability to sound smart, not being smart. The post that sounds convincing and is written in an entertaining way will get more traction than a dull but accurate and intelligent take.

This dynamic means that the more time put into researching a piece per week (therefore hopefully making it smarter) also means that I am consequently decreasing its value because I have less time to make my writing punchier (thereby making the pieces perform worse). There is a sweet spot between spending my time writing quips and making spreadsheets that I haven’t figured out quite yet. In 2023, I’m going to continue to go down strange rabbit holes, but I’m also going to try to make sure the writing is more interesting.

This exercise has forced me to think more deeply about the value I’m adding with this newsletter. For it to take the next step of becoming a top 5 newsletter in the world—my very humble, totally unrealistic goal—I need to maintain my degree of accuracy while increasing my level of entertainment and learning. Here’s to a 2023 where my writing is funnier, smarter, and—hopefully—accurate.

Thanks to our Sponsor: Sunsama

Thanks to this week’s sponsor, Sunsama, the planning assistant that helps you stay focused and on task. Join thousands of high-achievers from Uber, Spotify, YC and more that use Sunsama to get their best work done.