Sponsored By: Write of Passage

This article is brought to you by Write of Passage, an online course taught by David Perell designed to help you become a better writer and start building a reputation online.

Programming Note: Apologies this is coming out so late! Had a very sick puppy today, and as much as I love being on time when I post, I love my dog more. She is fine now—thanks for your patience!

In times of crisis, founders are expected to rise to the occasion, to become wartime leaders, to lead their employees to glory and riches. Evan Spiegel’s response? Announcing a stock split that will allow him to sell shares without reducing his super-voting powers.

If you had predicted this outcome a few years ago, you would’ve been a laughingstock. Analyst reports on the company were full of hope, pushing the narrative of augmented reality (AR) and international growth. Investor presentations were filled with bold promises of a future where Snap was an advertising leader. They were so bullish that (only a year ago!) they promised to deliver 50%+ of yearly revenue growth. Instead, in Q2 they only delivered 13%. All of this points to a company that doesn’t understand what is happening to its own business.

Good writing is an unfair competitive advantage. Writers get more visibility online, and that visibility translates into their own personal monopolies. This newsletter itself is a testament to the power of writing online. I started from nowhere special and my writing has completely transformed my career.

If you are looking to improve your writing skills and start building your reputation online, then look no further than Write of Passage. It’s a course created by David Perell that will help you uncover your strengths, clearly communicate your value, and start gaining more visibility. Join thousands of other students like Packy McCormick and Ana Lorena Fabrega by accessing a free lesson from the course by clicking the link below.

Get the free lesson
Want to hide ads? Become a subscriber

However, what has gone wrong isn’t a secret or some grand mystery. It is a combination of poor execution coupled with a fundamental misunderstanding of the digital ad market. Using the company’s most recent investor presentation as a visual aid, today’s piece will be in two parts. First an examination of their growth/product and second, an in-depth guide/analysis of their role in the digital ad market.

The problems start, unfortunately, at slide 1. 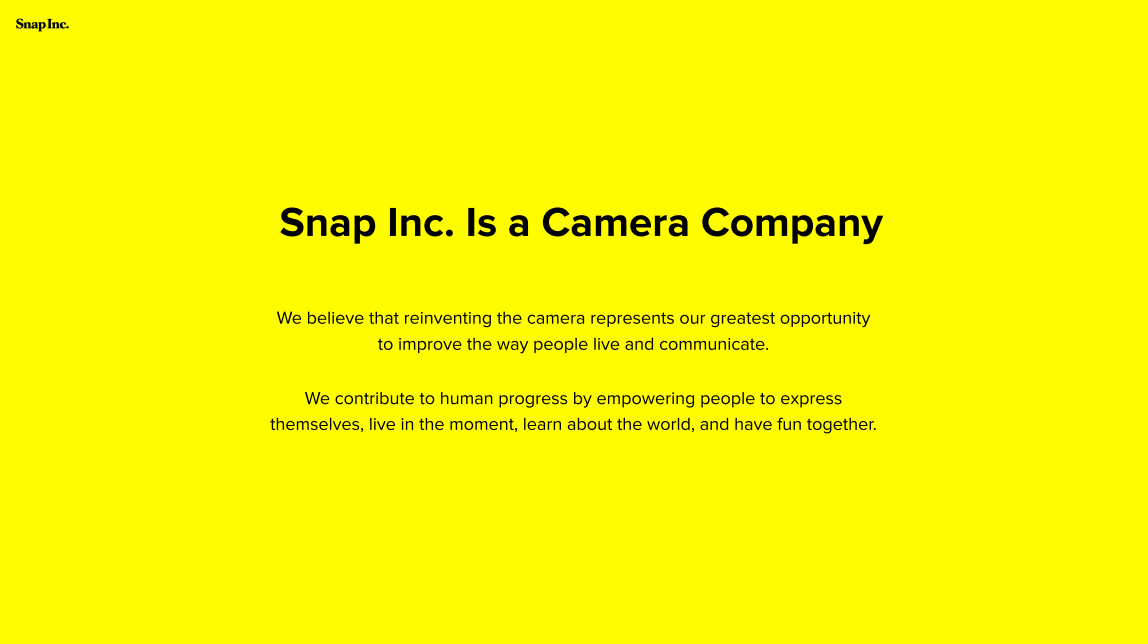 Snapchat is a camera company that doesn’t actually sell a camera. The equivalent would be Zoom saying “We are a webcam company.” It makes no sense! I feel like I’m taking crazy pills that no one else sees how bizarre this claim is. Snap is a company that utilizes other devices’ cameras to facilitate their messaging and entertainment app.

Focusing the mission of the company on being a “camera company” has led the organization in a totally fruitless exercise of hardware development. Their first effort, the Spectacles, had an incredible marketing campaign in 2017. Popup machines dispensing the glasses were everywhere and the media was abuzz with how cool the launch was. 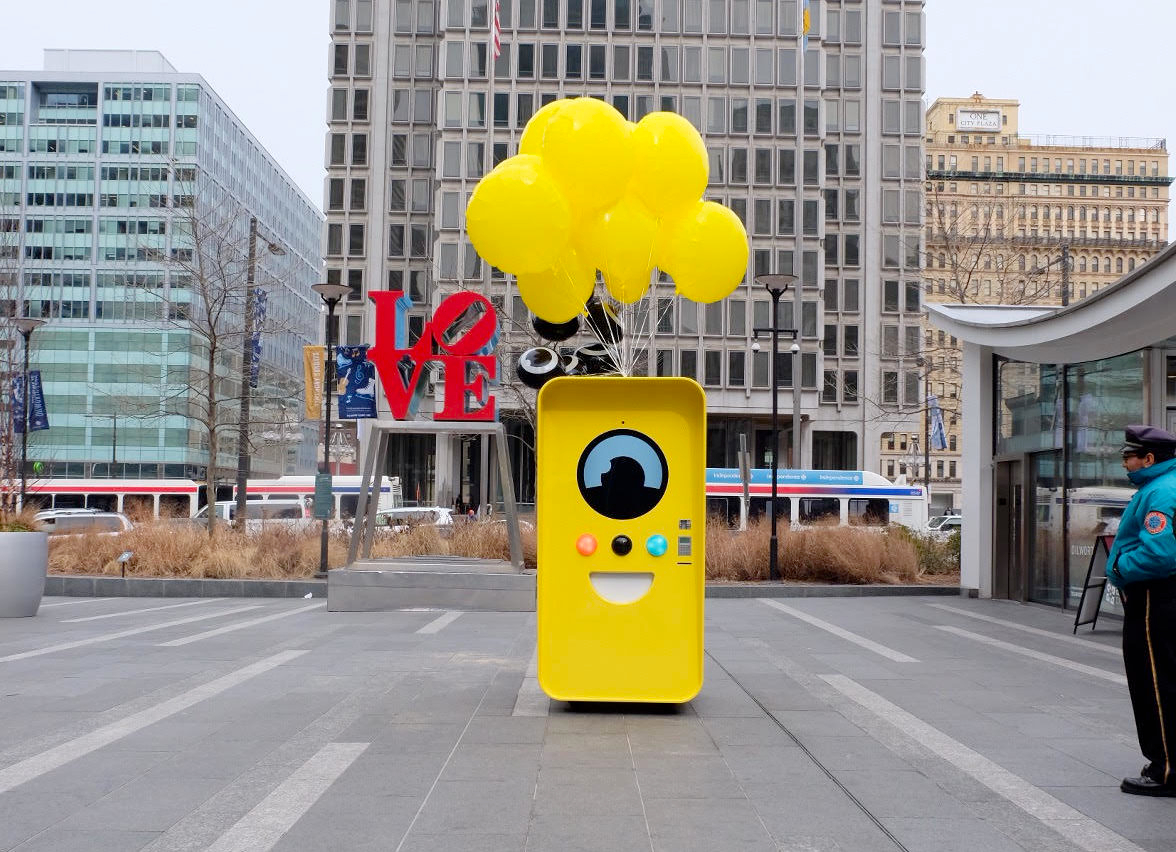 Despite this, they overproduced and took a $40M loss while selling less than 500K units. For comparison, in 2018 Apple sold ~600K iPhones a day (these devices actually have cameras people use). Followup hardware from Snap hasn't done any better, with various Spectacle iterations not making any material fiscal difference and their newest device, a selfie drone, has been underproduced with a 12+ week wait time. Poor execution is abundant.

Even if you argued that a camera is the combination of hardware and software (and this is an argument I’m inclined to agree with) Snap is still missing 50% of the materials required.

All of this is a distraction, a narrative mirage to distract retail investors. This incorrect positioning is purposeful because it allows the company the room to burn cash on vanity projects and enjoy an innovation premium in their stock price. If you were to evaluate this as a media company that monetizes via ads, it is doing a laughable job. If you were to evaluate this as a camera company *I grimaced as I typed that phrase* then the whole social media thing is just a stepping stone to an AR future.

Ugh. Onto the next slide. 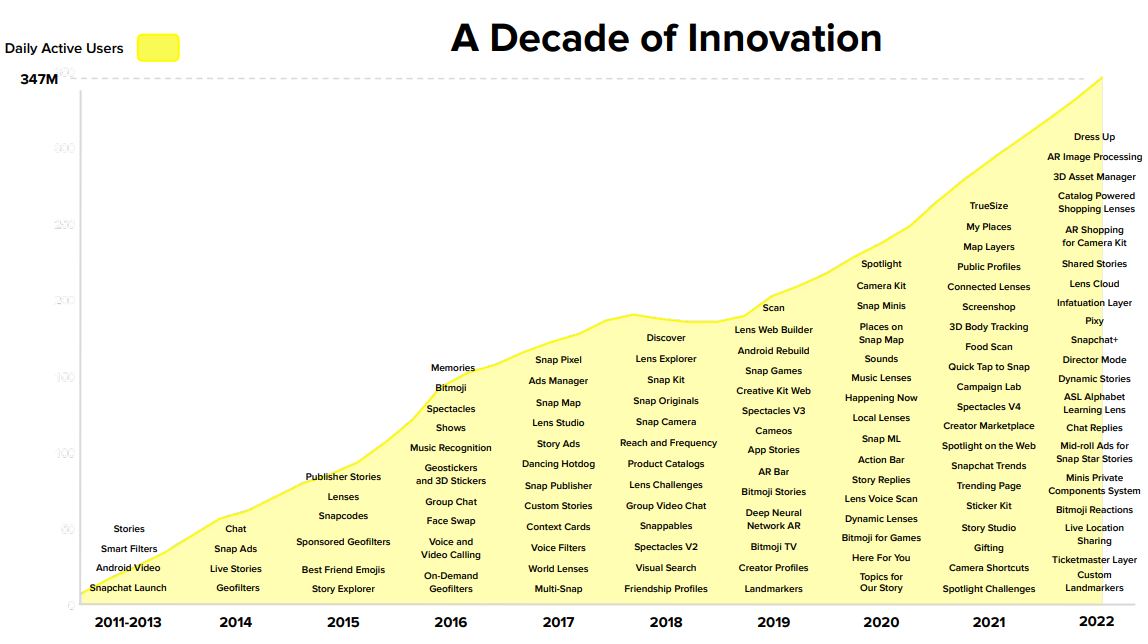 The company has been pushing this “angelic halo of innovation” narrative since their 2020 investor day. And looking at this chart, you would think that Snapchat’s product improvements have been key to its growth. However, compare it with this graph from the deck: 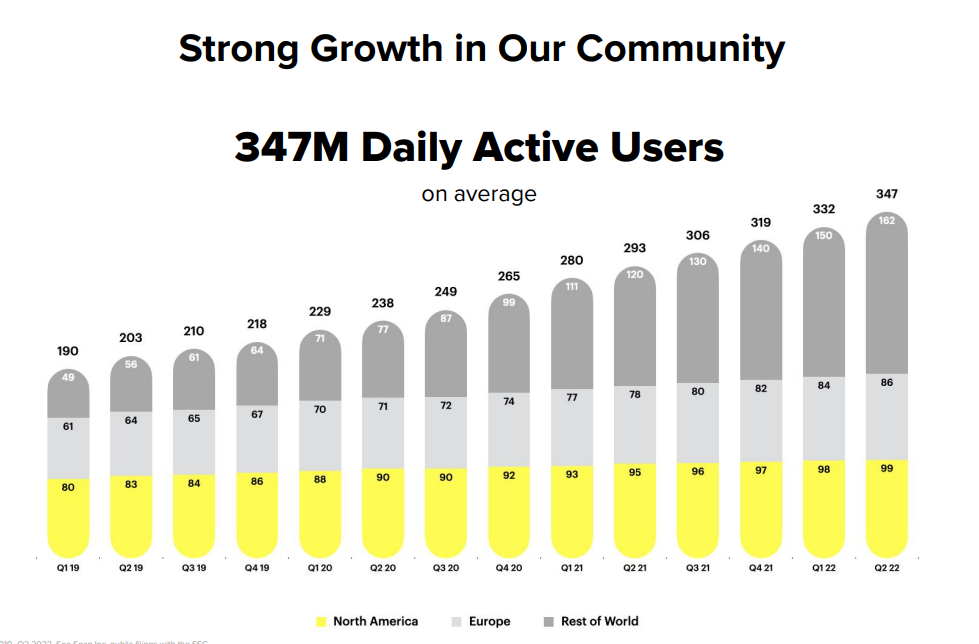 Almost all of its growth has come from international expansion (particularly in India). The change that happened in 2018? They released a functioning Android app. That's it folks. The rest of the “innovations,” acquisitions, releases, and announcements resulted in comparatively pitiful growth. TikTok added 500M users in 2 quarters in 2020! Shoot, even stodgy Meta added more users over the same time period.

I am happy to pay an innovation premium to a company that deserves it. Some teams are just better at making cool stuff, and those stocks will be more expensive. Snapchat’s argument that they have had a “decade of innovation” would only be true if they were generating differentiated user growth. That simply isn’t true. The company’s most recent products include a subscription-supported Snapchat+ that has exclusive features; their other big release was a web version of their app. Both of these feel like iterative improvements of a product team desperate to eke out more growth. These are normal and good things to build! But Snap should be in “Oh no, we might die” mode. These launches are not big innovations of totally new products like the company pretends or advertises. Or, when Snap does do something innovative, it ends up being small.

Really, the biggest competitive threat is TikTok, and while Snap has a similar video feed within its app, it doesn’t have the same power or capabilities as TikTok. The company's last exponential growth-inducing innovation was the stories format in October 2013. Everything since then has just been in the service of linear growth.

The problems don’t stop there. Monetization is busted too. 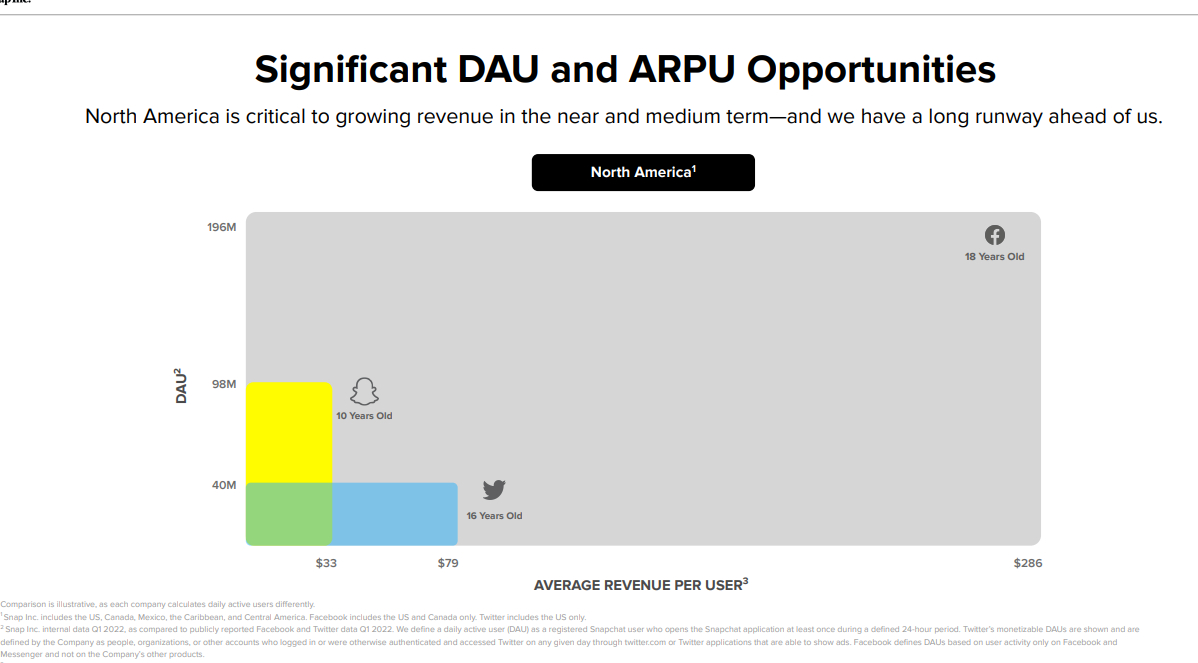 If a company is bragging about how they make less revenue per user than Twitter, investors should panic. Look, I recognize the argument the company is trying to make here. Yes, Meta makes more per user and has a lot more daily active users. The intellectually lazy (dishonest?) position would be that Snapchat will inevitably get there too. However, it’s not at all inevitable, and in fact, I highly doubt they ever will monetize each user as well as Meta can.

To understand why, you have to know how the digital advertising market works. I recognize that this goes fairly in-depth, perhaps a little more than is naturally comfortable, but the details really matter here. Snap has skirted by with surface-level analysis, but it is in the details of the ad market that the whole business falls apart. I’ll explain how it works and compare Snap’s capabilities to the gold standard of Meta.

Ad performance is determined by two variables: targeting and attribution. I wrote about this pretty extensively in a previous piece on Twitter, but a quick quote:

Thanks to our Sponsor: Write of Passage

If you are looking for ways to become a better writer and increase your visibility online, David Perell is here to help. To get started for free, he’s created a guide to help you discover your strengths, communicate your value, and build your reputation online. To get a free lesson from his Write of Passage course click the link below.