The End of Software, Again

The impending doom of horizontal SaaS

Red-shirted protestors marched up and down the streets of New York screaming their battle cry, “The End of Software.” Their garments symbolically bloodied by the ridiculous cost of CRM systems like Siebel, they chanted, they marched, they bathed the sidewalks in the melodrama that is the special talent of all white guys who sell B2B software. This farce of a movement was taking place in front of the Siebel customer conference in early 2000. It was stupid—but that was the point. This “protest” was actually a Salesforce marketing stunt. 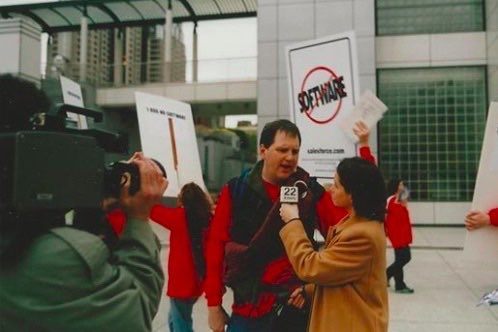 When Salesforce was birthed in 1999, almost all software meant for business was delivered “on-prem.” Meaning that when a business bought software, the next step was a sweaty engineer would show up from Seattle, sit in their server room for 2 weeks, and promptly send a $2 million dollar service bill. This sucked. But this was software.

Salesforce pioneered something new — the cloud. Instead of an engineer eating at Ruth Chris’s on the customer’s dime, the software could just be delivered via an internet browser. Way, way better. To further differentiate itself, Salesforce allowed (or forced) customers to purchase software on a subscription versus the license typically required by their CRM competitors. By doing it on a subscription versus perpetual license it made their price significantly less.

Salesforce argued that a radically different product delivery method, coupled with a novel monetization structure, signified that software was over. But this is….obviously wrong because they are literally selling software. What they actually meant was the previous software paradigm was over. And in that regard, they were right. There are 1000x more software companies now than there were in 2000 (and the size of those businesses are way larger too) but going from licensed/on-prem to subscription/cloud was a significant shift, rapidly changing the power structure of numerous markets.

I believe we are now at a moment of equal import — software is undergoing a quiet revolution that will dramatically alter the power, profits, and market share of incumbents. This is the biggest, most important trend in B2B software since the cloud in 2000. There have been elements of this idea scattered everywhere, but I have yet to find anyone who has, to my satisfaction, actually thought through all the implications. Simply put:

Just as the internet and web browser unlocked the previous shift, the new ease of embedding payments, lending, and other financial products will allow industry-specific software platforms (Vertical SaaS) to destroy multi-market/horizontal solutions like Salesforce. Ever smaller niches will be able to sustain venture-scale software companies because of the addition of financial products. Over time, these niche players will eat their way upmarket capturing SMB then Mid-Cap until the Salesforce’s of today only serve legacy behemoths.

I recognize this is a big claim but stick with me.

To lay the intellectual foundations to support my assertions, I’ll start by discussing some history and theory. This is important because it is very, very rare that something truly new happens in business and what we will see occur in B2B software has happened elsewhere. From there, I’ll tell you all the reasons that you may be wrong, and how I am adjusting the deployment of my capital based on my theory.

We reside in the ASS machine

I think of enterprise software in two general periods: BS and ASS (Before Salesforce and After Salesforce’s Success).

During the BS period, software was installed on-prem by professional services teams and was sold via license. Since 2000, we have been in the ASS period.

Some people (prominently a16z) might argue that product-led growth and bottom-up GTM are the third era of software starting around 2010. I disagree. In my opinion, a new era needs to be accompanied by a dramatic change in monetization and technology, not just marketing strategy. PLG and Bottoms-Up are simply more efficient iterations of Salesforce’s model. This is a hot take and I recognize some of you will disagree with me on this one :)

Regardless, during the ASS period we have learned a ton! Lots of big, public companies have established various operating heuristics that we know to be true in B2B software. A few quick examples:

Whatever the audience, sales strategy, or product, there was one rule that became universal—don’t exclusively sell to small and medium businesses. These customer cohorts will churn more frequently, have a Net Revenue Retention that barely breaks 100% (if your company is good), and will offer significantly smaller Average Contract Value of <$15k versus an enterprise contract of $50k+. Paradoxically, almost all startups start by selling to this segment but the goal is always to move upmarket as quickly as possible.

Note: I scanned 150+ public software companies SEC documents and couldn’t find a single company that didn’t portray an ambition to move upmarket from SMB. If you can find one that does, I’ll give you a free month of Napkin Math subscription.

When this law is paired with the need for software companies to pursue large markets, there are very, very few vertical SaaS companies to reach public market size (Shopify and Procore are the two best semi-recent examples). To get there they typically had to focus on a market so massive, so fragmented, and so underserved that the horizontal platforms couldn’t truly fit their needs. The necessities of subscription pricing made it incredibly difficult to achieve the delicate balance between profit/growth.

When the history of software is overlaid with disruption theory it becomes a lot more clear on why fintech is so important.

To unlock the rest of the article with examples of startups deploying this playbook, reasons I could be wrong, and how executives can respond to this new threat, please subscribe. Your financial support means I am able to continue to publish independent research for the benefit of all.
Subscribe

When you subscribe you also get access to everything in the Every library of hundreds of in-depth essays exploring the most fascinating and useful concepts in tech, strategy, and productivity.

...Along with access to our Discord community, where you can interact with me and hundreds of other readers.