In popular lore, the Spanish conquistador Cortes burned the boats, but to be historically accurate, we must use the less satisfactory descriptor of destroyed. Recognizing that there was only one way for his army to survive the upcoming battles, Cortes gave his soldiers one path—forward. He destroyed his boats so the army had no choice but victory. From there, he marched against Montezuma and the Aztecs, slaughtering ~100K people along the way, buying riches and notoriety with the blood of innocents. He kinda reminds of Mark Zuckerberg.

Stick with me now—Cortes is primarily known for helping discover new geographies, being a genocidal maniac responsible for the mass murder of an entire race, and for getting fabulously rich. The Zuck helped form the Facebook digital nation state, is somewhat responsible for the death of thousands in Myanmar, and is Scrooge McDuck level of rich-rich. So maybe not the exact same as Cortes, but maybe like a millennial, lizard-person, Diet-Coke version of Cortes.

And, like Cortes, Zuckerberg has decided to burn the boats.

Last week, The Verge got a hold of an internal Meta product strategy memo entitled “Building the Discovery Engine.” Written by Tom Alison, the current leader of the Facebook app, it outlined how Facebook was going to completely change its feed to compete with TikTok. Rather than just show the content of the people you are connected to, the feed will also help you discover content that you may be interested in.

Consider how crazy this moment is. Since 2007, Facebook has defined what social products meant on the Web and here, after 15 years of leadership, they missed the boat on this one (sorry, I’m done with marine metaphors). They will end up totally capitulating to TikTok’s feed modality. While Meta has ripped off others innovations before by copying Snapchat’s stories format, this is something different. This isn’t just adding a new way to display content to friends. This is an abandonment of the idea that, until now, has defined Facebook: the social graph. It represents a shift in how we should think about social media products.

Today’s (paid) post will analyze the state of the company, the product choices that lead to this moment, and what this change can indicate about the future of digital entertainment.

The Current State of Affairs 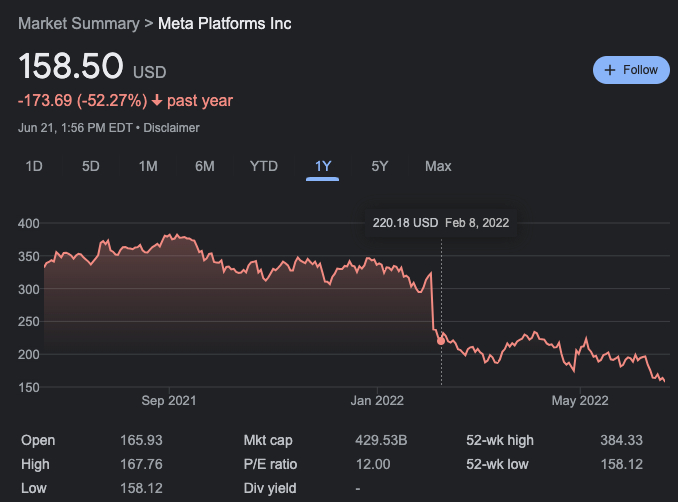 Being down 52% is, to use a technical term, “being down bad.” A combination of new regulations reducing ad efficacy, billions of investment into their VR platform, and rising competition has resulted in the company’s stock price being crushed.

If you were to pull some random market research report, they would say that Facebook is a company in the digital ad market. This may be technically true, but it’s not wholly accurate. Facebook is a company that is in the eyeball business that just so happens to monetize via digital advertising. Their primary function is to get people looking and clicking until the day they die.

The scale at which they do so is incredible:

They have essentially reached the point where every person with internet access on the planet has used their apps. The prerogative for their team is no longer growth at all costs— it’s protecting their fiefdom…also at all costs.

When someone says that X service is stealing market share from Facebook, it's important to be specific about what they actually mean. It could be the digital ad market—meaning marketing dollars that would’ve gone to them have gone somewhere else. But it could also be that someone is taking timeshare away from the company. Anything, and I mean anything, that people spend time on besides Facebook is a competitive threat to them. Shoot, you could probably make an argument that even Gmail is at least tangentially competitive.

TikTok is a threat on both axes of competition. Their ad revenue is forecasted to be hit ~$12B this year, triple from the year before. This is impressive but relatively minuscule compared to the $115B that Meta pulled in last year. However the timeshare win is staggering. From my piece a few weeks ago:

“​​The average TikTok user is on the app for 89 minutes a day. They open it over 19 times a day. The app is the third most used social app in America, topping Snapchat, LinkedIn, Twitter, and Pinterest. It is used by over a billion people a month. Assuming a 50% dropoff from monthly to daily active users, the app consumes 84,608 man-years a day.”

For an app that only got started in the U.S. in the last five years and came to prominence over the last two, these results are impressive. And keep in mind, every minute a user is scrolling TikTok is another moment they aren’t on a Meta property. Note: TikTok’s parent company ByteDance is not a public company, so some of the Napkin Math on time spent is a guesstimate. The numbers above come from a leaked pitch deck, while other sources look at it as lower. Regardless, this number is large and growing, directly taking away from Meta.

While much of this victory was determined by format, with TikTok’s video-only vertical feed, there is a deeper truth this uncovers.

Why On Earth Would I Care About Your Social?

“Almost all feeds end up vying with each other in the zero sum attention landscape, and as such, they all end up getting pulled into competing on the same axis of interest or entertainment.” Eugene Wei

It is exceedingly rare to see a company abandon an advantage that got them a trillion-dollar valuation. But that is exactly what Facebook is doing. To understand why we need to start in 2007.

I know, I know, a paywall sucks. But by subscribing you get access to nuanced, thoughtful analysis that will help you understand technology companies. Membership includes access to reports I've done on Netflix, Spotify, Twilio, and lots more.

You can join 50K+ other readers who represent every top tech company and over 50B in VC assets under management—all for a dollar for your first two weeks. If you want to support independent research you can click the button below: