Crash: Pitch a Company, Get a Job

Candidates earn jobs by putting in more work than their competition

There’s a certain type of young adult. You probably know one, or perhaps you are one.

This person earnestly participates in high school. Sports, grades, activities. They take the ACT and apply to a bunch of colleges. They get into a few; they get rejected by a few.

This 18-year-old doesn’t know what they want in life -- but who does? College is the answer; we all know people with degrees earn a higher salary than people without them.

Fast forward to graduation. Perhaps they received a degree in business or liberal arts. But can’t find a job. What’s their solution? Oftentimes it’s more of the same: off to grad school. More time spent away from the real world, more money spilling out of their bank account.

It’s easy to blame the major: “you should’ve studied engineering.” And while we need more engineers, that’s not the issue.

The issue is this: it’s a myth that you need a degree to get an entry level job.

And it turns out those two things are a lot easier to do than most people think. And they certainly don’t require going to college.

Crash is a place for non-technical job seekers to launch their careers.

Crash figured out the best way to get hired, then turned it into a replicable system for other people to use.

Most candidates approach job seeking in the same way. They write a resume and cover letter and apply to hundreds of jobs. It rarely works, and never works well. 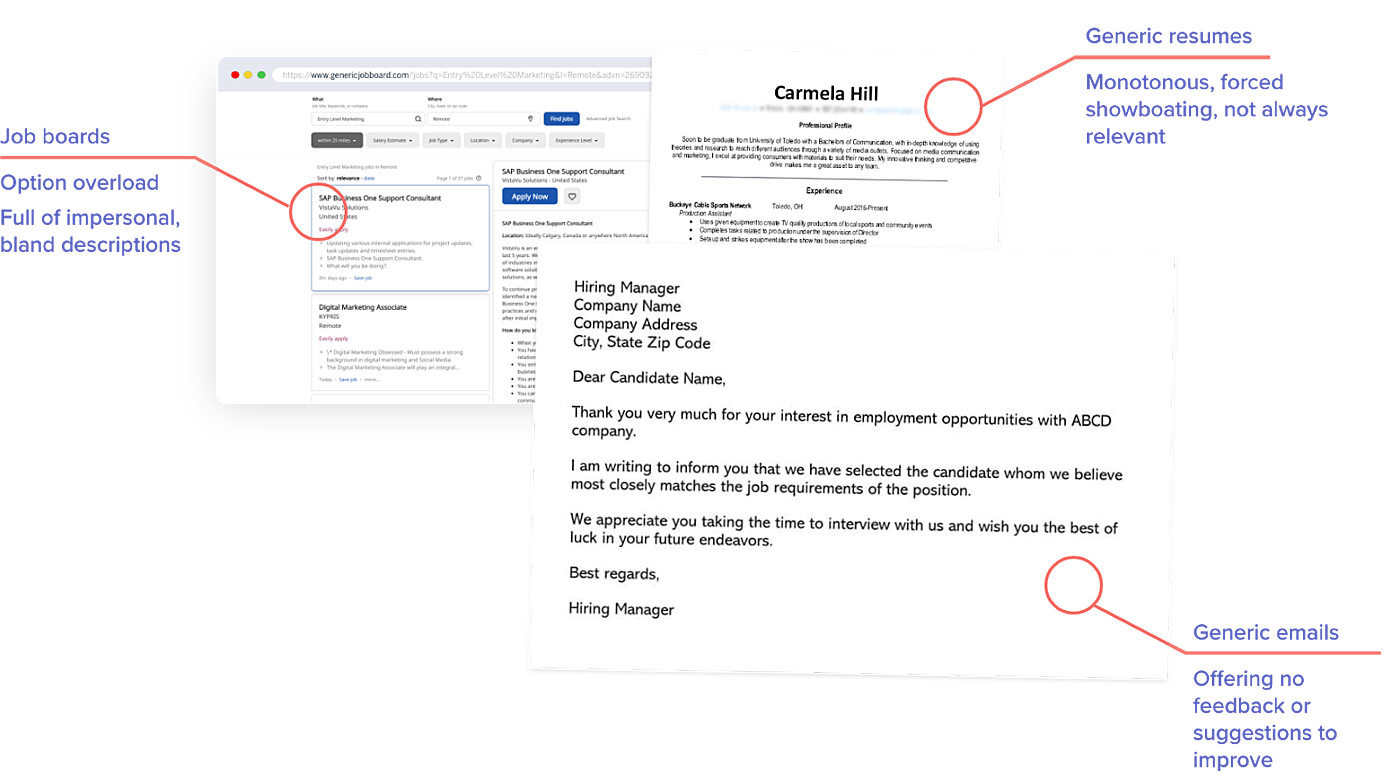 And it’s really a function of the internet. There’s a one-time cost to write a generic resume and a near zero cost to send it to as many job applications as you wish. This is great! Except when everyone else does the same thing.

Job postings quickly receive hundreds, thousands, or even tens of thousands of applications. To solve the problem -- to earn a job -- isn’t to send your resume to more applications, but rather to spend more time on a few applications you really care about.

Crash helps their candidates build company “pitches” where candidates might create a video, design something for the company (providing value before getting an interview!), and display a few skills or projects. 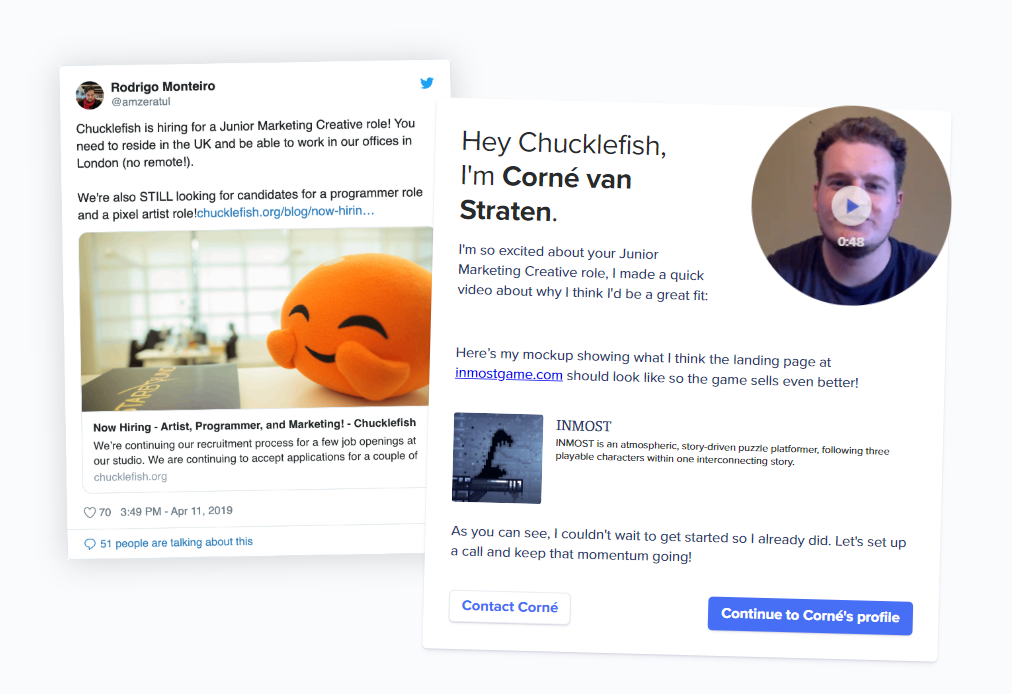 Importantly, this increases the marginal costs for the candidate to participate in the labor market. By showing that they are expliciting willing to incur a higher cost, they signal to the other market participants (employers) that they are more serious about the transaction. A tangible example: instead of writing “Proficient at Copywriting”, send them a redesign of one of their webpages and tell them why you think it would sell better. .

So why don’t more people do this? The answer is simple: it’s uncomfortable being different. In the words of founder Isaac Morehouse (source):

One week of hard work can get you a lot more jobs than you think. But the draw of being normal is less scary than increasing your odds of success by being abnormal.

Crash is clearly a good value proposition for its customers, but it is a good business?

Right now Crash makes money from candidates. There’s a free tier and $49 Pro tier, which includes things like unlimited pitches, a review by the Crash team and access to a Slack group.

If Crash can build a job portal with software, they will likely have 80%+ gross margins. On a $49 transaction, there will only be a few dollars worth of hosting and payment fees that eat into the profits. But I suspect Crash won’t be able to build a job portal without human intervention. For example, if it takes a $50k per year employee (~$25 per hour) 30 minutes to review a Crash profile and make a recommendation, it would reduce margins by 25%.

Another important part of this business is that it’s a one-time transaction. There aren’t repeat purchases, because the problem (getting a job) is solved by using the service once. This means that Crash doesn’t have the advantage of making up marketing spend with multiple purchases; the entire lifetime value is in a single purchase.

Despite these problems, there is good news: the unit economics might improve when Crash gets bigger. If Crash accomplishes the goal of having lots of candidates pitching companies, they simultaneously accomplish the goal of curating the labor market for employers. Recruiting is a $200 billion market. Eventually Crash can charge employers a fee to highlight their job posting to candidates.

Is it going to work?

I believe Crash provides a great service. And I think it will work to help people get jobs. But the question I have is this: if they become a large business, what is their moat? If Crash’s method works really well -- and they become bigger by helping more candidates -- what’s stopping another entrepreneur from replicating Crash’s tactics and building a competitor? Right now I’m not sure there is a good answer.

On the internet, switching costs between job boards is nearly zero. In order to have a successful labor marketplace, there has to be some scarcity to make the platform valuable. Then, the platform has to control that scarcity. A good example of this is when labor marketplaces create scarcity by filtering the very top of the market (TripleByte, Toptal, etc.). (Note: top universities are masters at this game.) Similar to eCommerce, if you don’t offer something distinctly advantages over the rest of the market, you turn into a commodity.

In my opinion, Crash has the best chance to succeed if they build a brand around a particular niche. For example, Crash could try to become the best place to hire customer success people. Then it becomes more likely for both candidates and employers to go to Crash over any other job board for that niche because Crash would be the best place to find them.

Even though I really like how they are helping young people find jobs, I’m concerned that Crash’s ceiling is capped. Because if Crash really works, it will be copied.