How product, marketing, and cost innovations create a massive opportunity

In Victoria, British Columbia, Andrew Wilkinson has been working on a local news project for just over a year. He started by hiring a journalist to create “something to skim that gives me a rough sense of what’s happening” and ran Facebook ads to collect emails.

So far it’s working. In September he shared an update in a Twitter thread: the paper, called Capital Daily, had amassed over 40k free daily email subscribers. Victoria only has about 367,000 people, so this represents around 10% of the population. Not too shabby for a startup media company.

I’ve been mulling over the local news idea since I saw this thread because it’s easy to imagine how this could scale through multiple cities. There are 349 cities in America with a population over 100,000, and an additional 4,115 cities with a population between 10,000 and 100,000. If 10% of each city subscribes to a newsletter, and the APRU of a subscriber is even $20, then we can estimate the Average Revenue Per Citizen (ARPC) to be around $2. If we extend the average revenue per citizen to these other cities, it's not hard to imagine nine figures in revenue going to… someone.

While some local newspapers have successfully pivoted to national coverage (like the NY Times or Washington Post), most of them are shrinking or have closed. This is because of three main reasons: disruption from the internet, involvement from private equity, and poor management.

Therein lies the opportunity. You could create a local newsletter for your own city. Then, if you are feeling ambitious, create newsletters for more cities. There are three things that make now the perfect time: a new editorial product (short, concise daily briefings), a new marketing channel (local keywords in Facebook Ads), and a new cost structure (no legacy overhead).

Local news has been left for dead by both readers and writers. There are some people trying to revitalize local news, and that’s exciting. But there’s still a long way to go. Is Capital Daily a one-off fluke, or is there a real opportunity here? I spent some time thinking about it below.

For years, media distribution was limited by the cost of delivering physical newspapers. This may seem like it would make newspapers a bad business, but it actually made them a great business. Because it was costly to operate a printing press, delivery trucks and a whole bunch of people to manage it all, newspapers were hard to copy.

There was also strong demand from advertisers to reach newspaper readers. The main advertising channels back then were in television, ratio, direct mail, billboards and newspapers. Of those, newspapers were one of the most effective. They had a captive audience: there was often just one newspaper in town, so if an advertiser wanted to reach a citizen, the newspaper was the best way to do it.

These things created a “local monopoly” for many newspapers.

Usually, a monopoly is a good thing for the company and a bad thing for the customers and competitors. And it was no different with newspapers. They were excellent businesses to own because they had large moats. Not only did Warren Buffett famously invest in newspapers, but many other private equity funds did as well.

As an example, Liberty Group Publishing (later to be called GateHouse Media) was formed in 1998 with the backing of Leonard Green & Partners. They bought 160 local newspapers from Holliger International (a media conglomerate that has since gone bankrupt) and subsequently expanded to 330 newspapers by 2000.

But private equity involvement wasn’t always so pretty. In the late 1990s, newspapers weren’t exactly a growing industry. But because of the structure of these private equity firms, growth wasn’t an issue. They cared about inking out cash flow.

See, private equity firms can even make money on a shrinking business. By taking out debt to buy the business, and paying down that debt over time, their equity value can rise even as the top line falls. Think of it like this: imagine you buy a house for $300k, using $60k of equity and $240k of debt. Now imagine over the course of 10 years the home decreases in value to $270k. Let’s say over that time period you paid off $160k of the debt (two thirds of a 15-year mortgage), leaving you with outstanding debt of $80k. Despite the home dropping in value from $300k to $270k, your equity increased from $60k to $190k ($270k home value - $80k of existing debt). This is how you can make money on shrinking assets as long as it has good cash flow.

As a result of this structure (along with general mismanagement), newspapers declined. Journalists and editors were cut from payroll. The front page morphed into a mosaic of smiling real estate agents and $5 off coupons for Ricky’s Diner. By cutting editorial and optimizing advertisements, local newspapers slowly saw their product deteriorate. Readers dealt with it because it was their only option.

That is until the internet came along and broke their monopoly.

The internet allowed anyone to publish to a worldwide audience. Previously local newsletters had a one way track running from the keys of their journalists to the attention of citizens. Now, anyone could hijack that train.

Consider the sections of a typical newspaper: national news, local news, opinion, business, lifestyle, classifieds, and comics. For each one of these, except local news, there were now national publications or social media platforms that provided a better service with more resources, and were only a click away. Local newspapers now competed against the New York Times, Gawker, Craigslist and Farmville, in addition to Facebook, Twitter, and Netflix.

Now that people in small towns weren’t simply getting news from one spot, advertisers had less incentive to advertise with them. Advertisers pay for attention, and attention was shifting online. Newspapers no longer had a captive audience.

All of these factors -- a deteriorating product, private equity involvement and internet disruption, -- has resulted in a continual decline in newspaper circulation since the late 1990s. 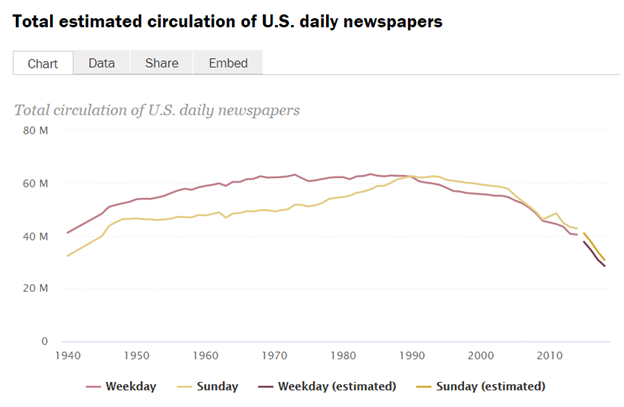 So if there’s a downward trend for local newspapers, why am I writing about it?

Will This Work Now?

As I mentioned at the beginning, there are three reasons I think local newsletters (not newspapers) could be revitalized. These are a new editorial product, a new marketing channel, and a new cost structure. Let’s walk through them. 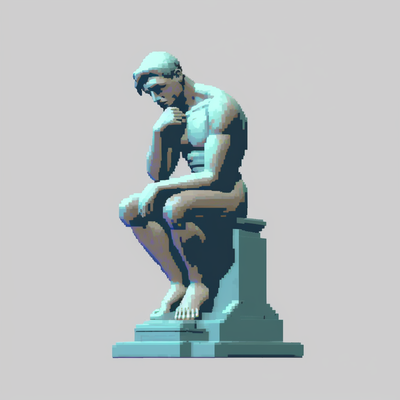