Map of a Downturn

Sponsored By: On Deck Business Development

Helping develop a business can be a bit lonely. You are usually forced to reinvent the wheel when it comes to best practices, playbooks, and tactics, and thus finding people with similar experiences to you is rather difficult.

Fortunately, there is a place where you can meet high-achieving business peers from companies like AWS and DoorDash. On Deck Business Development is a business development and partnerships community whose members are accelerating long-term growth through strategic partnerships while leveling up their careers with a curated network of leaders.

The applications are due next week so be sure to apply now!

I’ve worked in tech since 2010, just after the great recession, and pretty much the whole time people have been publishing articles warning that there was a tech bubble just about to burst. This sort of doomsaying got a lot quieter over the past few years, which perhaps in retrospect was telling. Now, the long-awaited tech correction might actually be happening.

The combination of events we’ve seen over the past few months is the most serious situation I’ve seen in my career so far. So what we’re going to do today is walk through all the data points that matter, and try to make sense of how they all fit together in a causal web. By the end you’ll have a good picture of what’s happening and how it all connects.

Let’s start by going over the data. 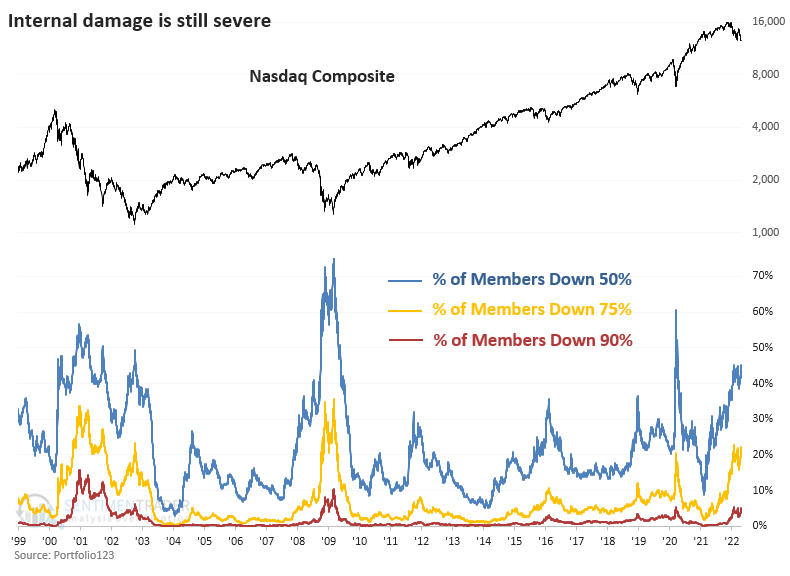 I wrote about this back in March but it’s only gotten worse since then. The companies that got hit the hardest seem to be newer, high-growth tech companies that once had sky-high revenue multiples: Zoom, Shopify, Roblox, Peloton (who I am still particularly long-term bullish on), Twilio, Snowflake, Coinbase, and many other have lost the majority of their value over the past few months.

Most of these still have solid underlying businesses, but people are beginning to question whether it ever actually made sense to pay 50x sales.

1) Previous "all-time" highs are completely irrelevant. It's not "cheap" because it is down 70%. Forget those prices happened.
2) Valuation multiples are always a hack proxy. Dangerous to use. If you insist, 10X should be considered AMAZING and an upper limit. Over that silly.

Did you think Bitcoin and Ethereum were supposed to be uncorrelated with public stock markets? Did you think with fears of inflation at an all time high people should be running to deflationary assets with a long-term capped supply?

If you did, I don’t blame you. But you were wrong:

Bitcoin peaked in November, same time as tech stocks, just short of $69k. Ethereum peaked that same month shortly after it passed $4,200. (You can’t make this up.) Now both are down 42% and 44%, respectively.

3. NFT sales are (probably) down

There was a big article in the WSJ this week asking “is this the beginning of the end for NFTs?” The NFT community hated it, and argues the data is “fake” and shouldn’t count the implosion of Axie Infinity, which I predicted in December.

There was a lot of back and forth on Twitter, with curated data from both sides supporting and rejecting the conclusion that NFT sales are flatlining, so let’s just say this one is a question mark for now.

Personally I expect NFT sales to look quite bad over the next few months, but we’ll see. (To be clear: I think this is a healthy and normal part of the long-term process of NFTs becoming a more meaningful part of our lives.)

It’s a rough time to be raising a VC fund. Not impossible, to be clear. But rough.

Partly, this is thanks to the “denominator effect”—LPs’ public holdings are worth less since the market crashed, while private valuations haven’t budged, so the percent of their net worth they have in VC has gone up. The denominator shrank, while the numerator stayed the same. Large LPs often have complex rules and formulas for how they should allocate capital, and this is one reason why many of them are hesitant to invest more in VC funds right now.

Another reason, which might not be so bad, is that there were a number of mega-funds raised earlier this year and late last year. So the theory is some LPs might be tapped out momentarily. If this is all that’s happening it’s not so bad.

I’ve also heard privately that some LPs are just spooked, and suddenly finding ways to pull out of prior agreements. An exact quote from my DMs: “it’s not going to be a fun year :)”

5. VCs are (starting to become) down on startups

To be clear: this one will take much longer to play out, and might not happen. Many VCs are investing funds they raised in the peak of the bull market over the previous two years, and they will keep investing those funds at a reasonable pace for the next few years.

That being said, this April, new data from CrunchBase showed the lowest levels of capital deployed in 12 months. So that’s something. But it’s not actually that bad: April funding was down 10% from March, and only down 13% from the time last year, the height of the boom.

The real question is what happens next. On that front there is much to be worried about. One prominent VC after another is sounding the alarm in a way I honestly have not seen before in my career:

Investor sentiment in Silicon Valley is the most negative since the dot-com crash.

Low interest rates and a flood of fast dumb late-stage capital has jacked up artificial paper venture returns. This has had several effects:

Open sourcing a convo we had with our team this week. “This is going to be a very rough year. Arguably the roughest year since the GFC. Markets, geopolitical uncertainty, pandemic ending/not ending, elections, etc.”

Could be wrong. But a lot of smart animals taking shelter. 🤞

Are we witnessing the Great VC Pullback of 2022?

After a few years of craziness, things seem to be really changing and everyone is trying to figure out what that means 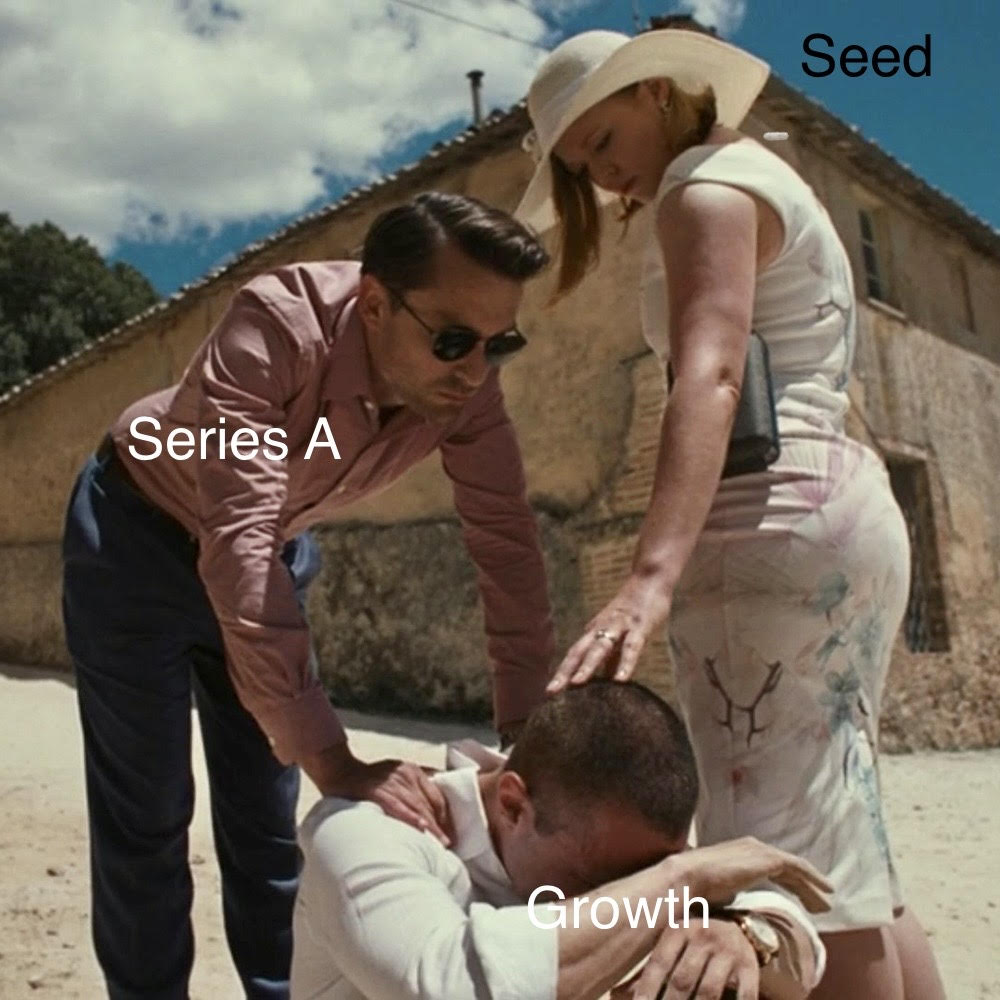 Some argue this is just a way for investors to strike fear in the hearts of founders to get them to accept lower valuations, but I don’t think so. The people saying this also funded companies in the past few years at high valuations, so while they might get lower prices tomorrow, they’d also be hurting their existing portfolio today. Not to mention, VC is a reputation-driven business, and if you say “the sky is falling” and then it doesn’t, you end up looking pretty silly.

To me it seems highly likely mid-to-late stage startups are going to feel some pain over the next 12 months.

6. Tech companies are down on employees

One way to deal with that pain is to get in front of it early. This week we saw a big spike in startup layoffs: Cameo, OnDeck, Mainstreet, Mural. We also saw layoffs at later-stage companies like Robinhood, Netflix, GoPuff, Peloton, Thrasio, Blend, Better, Noom, and more. There have also been hiring freezes at Meta, Netflix, and Twitter—and you can bet there are many magnitudes more hiring freezes at smaller companies that go unreported.

If you know the details behind any of these layoffs you might think, “ah that’s just a one-off”, but it is strange seeing them all together like this. Perhaps focusing too much on troubles in one specific business that led to layoffs might make us miss the forest for the trees.

The sad thing about layoffs is they tend to come in bunches. We saw this in 2020 after the pandemic first hit, a lot of companies laid off workers all at the same time, because it minimizes damage to your reputation when you can blame it on macro problems. Now that the “downturn” narrative is in full swing, expect a lot of companies to use it to hide poor performance or get rid of underperforming departments and experiments.

The narrative shield effect only works for a little while, though, so I expect this to play out quickly, and perhaps the worst is already behind us.

Why is it happening?

This is the part where most articles vaguely hand-wave in the general direction of interest rates, inflation, oil prices, geopolitical instability, etc. But I always hate it when writers do that. It’s a cop out. Can we do better?

Yes, interest rates are up. But why? What does the war in Ukraine have to do with celebrity shout-out marketplaces laying off workers? It’s all very unsatisfying.

My goal for the next post is to draw a map (literally, like using Figma) that traces the links between these events in order to understand how it all fits together.

And I’m also obviously going to write an essay explaining what I learn from the exercise. This one is going to be for paid subscribers only, so if you’d like access and you’re not currently a paying subscriber, sign up.

Ok, that’s it for now! See ya next week.

Thanks to our Sponsor: On Deck Business Development

On Deck Business Development enables you to find your next big deal, the mentor you’ve been waiting for, or your next star hire. You will also get access to the On Deck network (imagine a curated LinkedIn for high-achievers) as soon as you join. 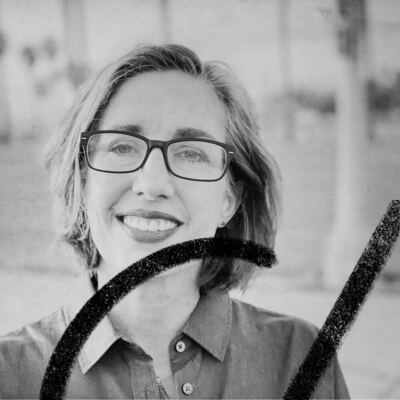 How To Write Philosophy with Dr. Pamela Hieronymi

Why are they doing it? And will it work?