You can watch this episode on YouTube or listen to Means of Creation on your podcast app of choice.

There’s a shift afoot at Twitter. The long-time microblogging platform has recently made a series of moves to position itself beyond just tweets, including acquiring the newsletter company Revue and introducing tools to help creators make money on the platform.

When Twitter acquired Revue, the company declared that it was making a “better home for writers,” apparently doubling down on its mission to help people create and share content with a plugged-in audience. But are we ready for longform Twitter?

Nick Sallon, Twitter’s Head of Longform Content, thinks so. We recently talked to him about all these changes at the company. We also discussed:

We hope you enjoy this conversation with Nick as much as we did! 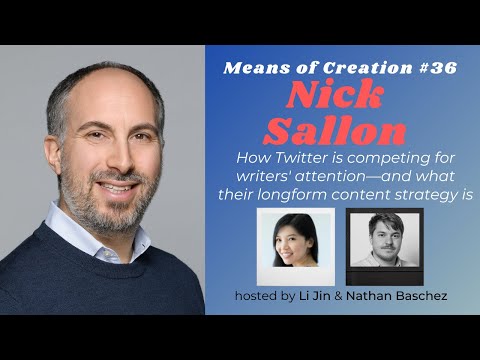 Listen in your Podcast App