Will the Metaverse replace PCs?

Meta thinks it will, and they are betting everything on it.

This article is brought to you by Candor, a beautifully designed Personal ReadMe platform that allows you to share how you work with your team—so you can build better connections, trust, and collaboration.

I have spent a lot of time lately trying to figure out what Meta’s vision of the metaverse is, and whether it will happen anytime soon. In the long run they anticipate both VR and AR components, but the AR piece is quite a long way off, and probably to some extent depends on VR delivering real wins. So for the purposes of this piece I am focused exclusively on VR.

Of course, nobody can see the future, but there are two main camps:

Believers think that at some point in the next 5–10 years we’ll mostly stop buying laptops and desktops, and instead spend our screen time in VR. They see obvious advantages to full immersion, and consider it just a matter of time before the technology is good enough and cheap enough to get us all to make the switch. The main obstacle, they believe, is technical.

Skeptics aren’t so sure. You could show them a VR headset that is feather-light, renders photorealistic graphics with zero latency, and has infinite battery life—and they’d still not bet that most people would choose it over regular old screens very often. Even a haptic bodysuit with a neural interface capable of writing directly to all five senses and a 360º treadmill wouldn’t change some of these people’s minds! The question in skeptics minds is not whether the tech can advance to where believers hope it will, but whether even if it does, it will cause significant behavior change beyond gaming and perhaps some other specialty experiences.

I decided this week was as good a time as any to publish where I’m at so far, because it was the week of Meta’s annual conference where they showcase all their latest tech, and because I am honestly still on the fence.

Deep in my bones I am a tech enthusiast. I can definitely feel the allure of escaping the limits of physics and exploring infinite virtual worlds. But I am also the kind of guy who prefers phone calls to zooms so I can wander around in my backyard with a coffee while I chat. And I have observed the surprising stickiness of convenient, low-fidelity experiences over inconvenient, rich ones in many arenas: I clumsily edit essays from my phone when I’m too lazy to get off the couch; I eat potato chips and protein shakes instead of actual meals; I scroll TikTok for hours instead of watching movies—you get the idea.

So I decided to see if I could get to the bottom of things.

People should come with ReadMes, just like software. That’s why Candor exists.

Candor is a Personal ReadMe platform that enables teams to share how they work and get the best from one another. Use it to improve onboarding, have better 1-on-1 meetings, and encourage constructive feedback and empathy across your team.

Over time as I conducted my research, I discovered I could inhabit the perspective of both believers and skeptics at will, depending on what frame of reference I used.

When I thought of VR as a virtual version of reality, it was obviously compelling. Who wouldn’t want an infinite mansion where you can hang out with all your friends anytime you want? What company wouldn’t want a stunning campus where each employee gets their own corner office with a ridiculous view and a bazillion monitors for enhanced productivity? What beating human heart wouldn’t want to fly through the sky like Neo or Iron Man?

If the metaverse feels like a limitless version of the real world, it clearly would be pretty dope. But, to be fair, that is a pretty big “if.”

When I started to think about VR as a technology that has to fit into my actual physical life—i.e. a screen that I have to strap to my face—suddenly it began to feel a lot less compelling. Once the novelty wore off, would a VR mansion really be all that interesting? Would hanging out with friends in VR actually be that much better than a group chat? I don’t know about you, but my group chats basically never convene for video calls—too much friction. Why would VR solve this?

To answer this question, I consulted a simple but powerful model of human behavior created by a Stanford social scientist named BJ Fogg. The basic idea is that a behavior only happens when there is a prompt, and when your motivation to do it exceeds the difficulty of doing it. 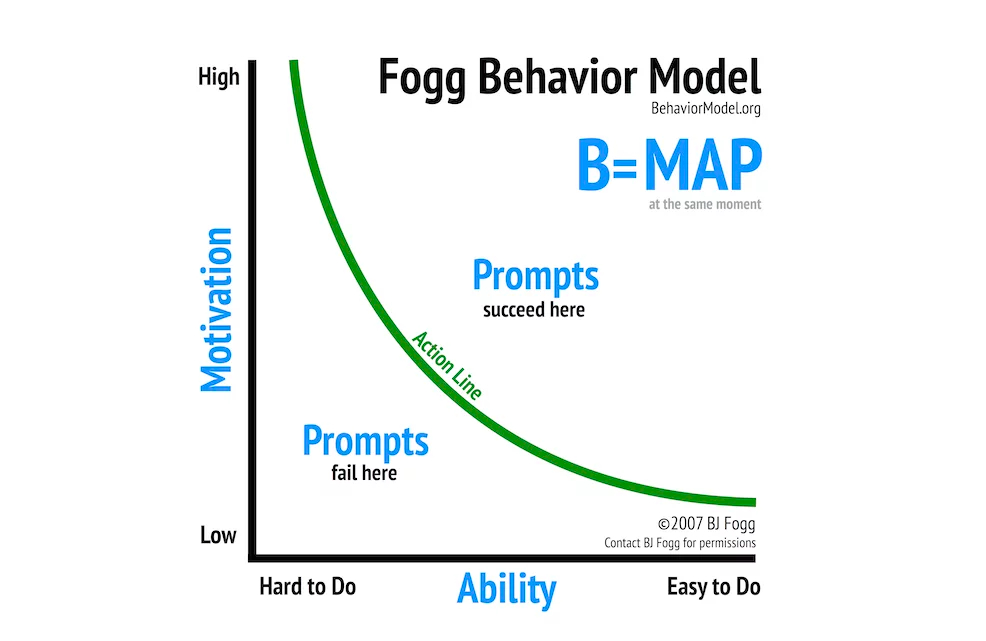 For example, you’re reading this because you got a Prompt via email or Twitter. You’ve learned through prior experience that you like this kind of essay, and perhaps you’re curious about the metaverse, so you’re Motivated. You know roughly how much time and energy it will take to read this, and you have the Ability to take it on right now. All three elements converged simultaneously, and—voilà!—the behavior is happening!

The interesting thing about this model is, some factors are much easier to control than others. Specifically, Motivation is relatively constant, while Ability is largely malleable by technology.

This is bad news for VR.

VR is a demanding technology. Not just in the sense that it’s difficult to get right for the engineers building it, it’s also demanding for users. The screen demands total attention. It literally puts blinders on you! The headset is physically uncomfortable for many people, it takes away your ability to see and hear the real world clearly, and it requires you to learn new interactions.

Assuming that you get past all of these hurdles, there is still the question of how VR fits into the context of your life. Do you want to take off your headset and disconnect from your virtual friends every time your partner or child enters the room?

If we are to plot VR on a continuum of “demanding” to “convenient” with other computing devices, it would look something like this:

From easy to hard:

But of course here we only have one dimension. VR believers would argue once we add the “motivation” axis the picture would look more like this: 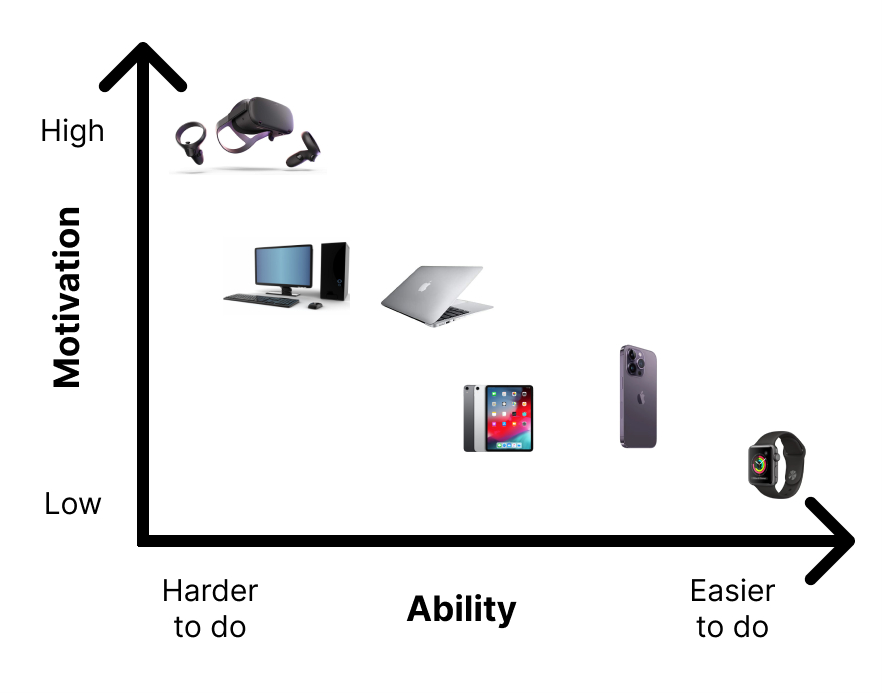 Actually they might concede that today the motivation isn’t that high, because VR is so new and there’s no network effect of other people to use it with, or software and experiences to use. But they think this will naturally take care of itself over time, the same way it happened on the web and with mobile.

I think in order to answer that question, we need to add a third dimension to the graph.

How motivated you are to do a thing depends on who you are and what your goals are. It’s different for everyone. Sure, there are commonalities—we all want to be safe and loved and well-fed—but we all go about getting those things in slightly different ways.

VR believers think we will work, play, socialize, and exercise in the metaverse. I think some types of work, play, socialization, and exercise might benefit tremendously from VR, but I truly wonder whether strapping on a headset is worth the increased friction for most types of work. This is where the third dimension of the graph above comes into play. 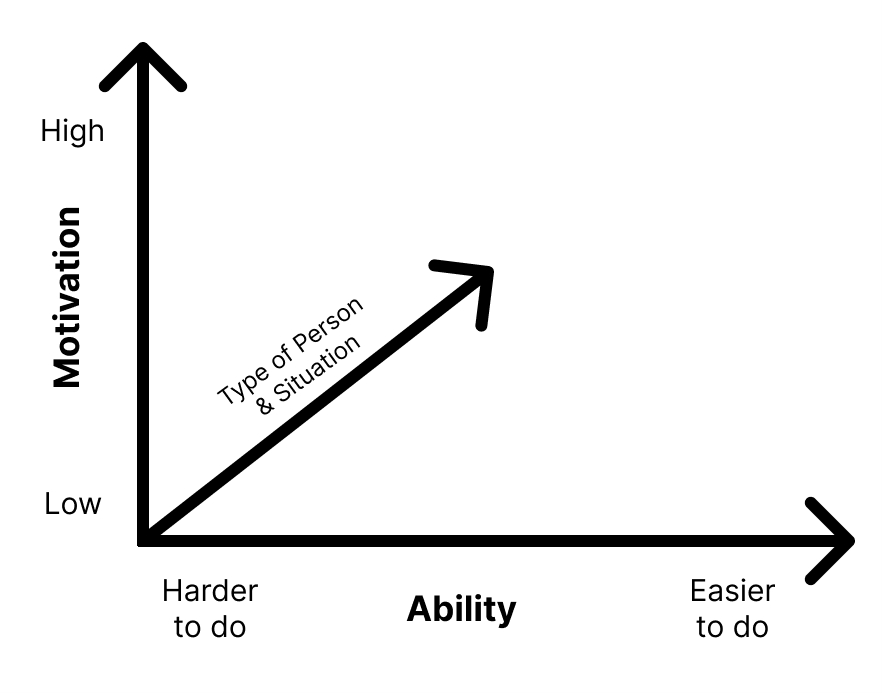 If you’re an architect or chemist or pilot trainee, it’s easy to see how working in VR is better. You are inherently dealing with 3D objects. But what about programmers? Accountants? Writers? Would I be more productive if I was writing in the metaverse? It’s hard for me to see how that would be the case.

The question is, how many types of work will benefit from VR? What types of play? What types of socialization? What types of exercise? I don’t think it’s that many. When I listened to Mark Zuckerberg talk yesterday, the main value proposition I heard was about a visceral sense of presence you get from being in VR with other people, and all the nonverbal signals you can see. But how much does that matter? The behavior of Meta employees suggests it doesn’t matter that much, because they largely avoid using their own product.

And as much as VR might be able to make massive improvements in speed and graphical fidelity, it’s hard to see how it can overcome the fundamental friction involved in strapping a thing on your face that blocks out the world.

So I have to admit… I am not optimistic.

Traditional PCs are only necessary for a subset of specific applications for a certain type of work or play. I can easily see a future where VR is to PC as PC is to smartphones: a subset of a subset.

If this is true, this would be a huge blow to Meta. It will probably result in Mark Zuckerberg resigning. Not because anybody could force him to (supervoting shares ftw!), but because why would he keep putting himself through this?? He is spending a truly ass-clenching amount of money to make this happen. If this doesn’t work, what else is there? 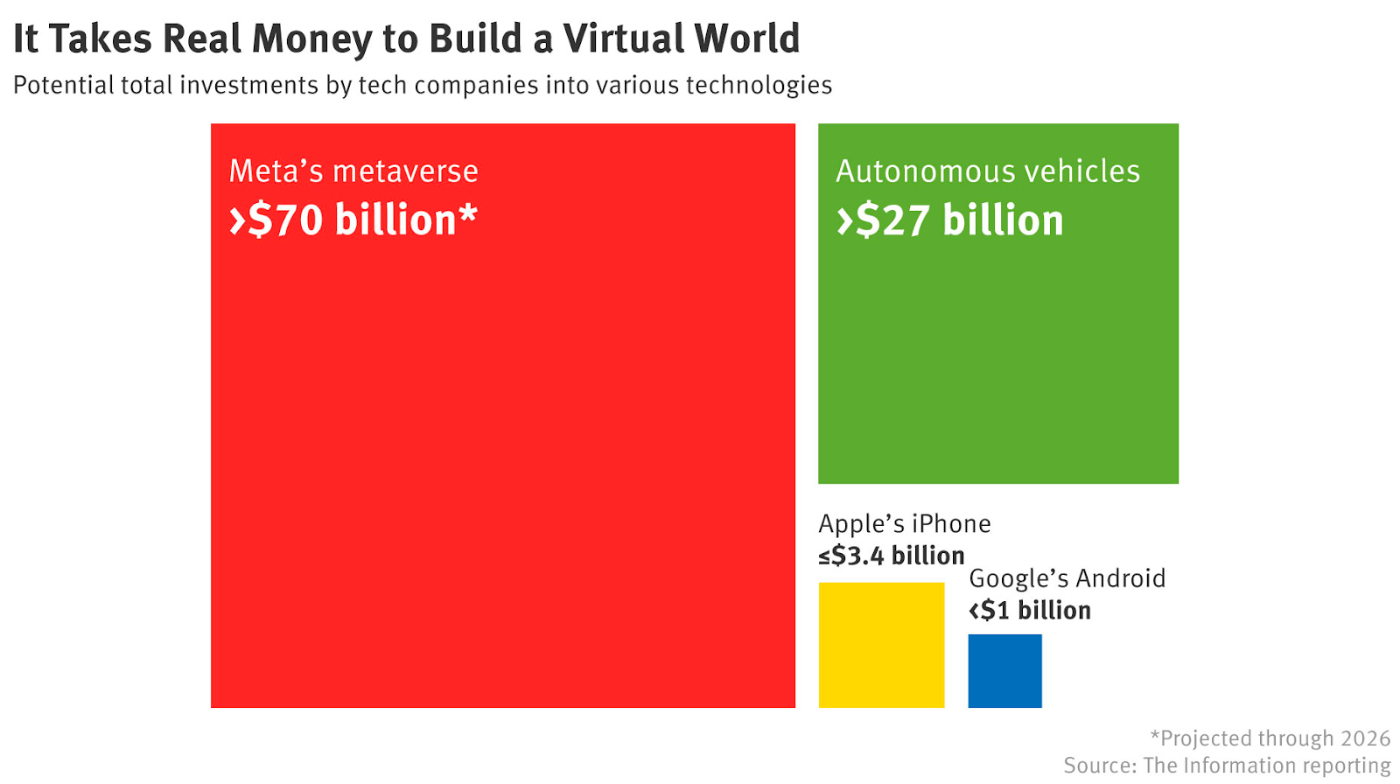 With the bar raised this high, the only possible route to success is if VR really is the next big computing platform, with Meta in a similar dominant position as Apple has in smartphones.

I am rooting for anyone who tries to build the future. But I just don’t see this one happening.

Thanks to our Sponsor: Candor

Become a better leader with Candor, a beautifully designed professional platform that helps managers foster a more collaborative culture and empower teammates to express their work style, motivations, and so much more!

Avoid misunderstandings and slumps—Candor is built so you can meet each teammate where they’re at and bring out the best in them.

Get Started for Free
Want to hide ads? Become a subscriber