The Argument for Democracy in Cyberspace

Ready to do the best work of your career? Become a Reforge member.

Reforge is the world’s leading career development membership for top-tier professionals in growth, product, marketing, and engineering. Gain a direct line to hard-won insights from leaders driving impact at companies like Eventbrite, Microsoft, SurveyMonkey, and more.

Reforge’s Summer cohort starts the week of July 18. Make the best investment for your career by applying for membership today.

Is Twitter a regular company? Or is it, as Jack Dorsey and many others believe, more like a public utility?

The idea and service is all that matters to me, and I will do whatever it takes to protect both. Twitter as a company has always been my sole issue and my biggest regret. It has been owned by Wall Street and the ad model. Taking it back from Wall Street is the correct first step.

In principle, I don’t believe anyone should own or run Twitter. It wants to be a public good at a protocol level, not a company. Solving for the problem of it being a company however, Elon is the singular solution I trust. I trust his mission to extend the light of consciousness.

I don’t think ‘public utility’ is the most useful metaphor to understand what Twitter and its peers actually are.

Public utilities make sense when the product is a simple commodity, essential for everyday life, and delivered through a set of pipes that are incredibly expensive to install and maintain. Because it doesn’t make sense for there to be lots of duplicate pipes and most people want basically the same thing from their water, electricity, and gas, the companies that run these are granted official government monopoly status in exchange for not charging too much and ensuring reliable access.

Social networks aren’t like this. There are no expensive pipes to install—in fact they are incredibly cheap to build. The problem is getting people to use them. Also, unlike public utilities, social networks offer complex value propositions. Different people want different things, so there can be no one-size-fits-all solution. Social networks are also generally free to use and generally always on, so the main problems public utilities are regulated to solve aren’t really an issue.

But just because Twitter isn’t much like a public utility doesn’t mean it’s a normal company, either.

I think the internet is more like land. In this metaphor:

Each city has a distinct personality, and within the city there are distinct neighborhoods and sub-communities. As with land, it’s easy to move into the wilderness and call it a city—the hard part is getting anyone to join you. People want to be close to lots of other people for all sorts of reasons: trade, romance, social status, etc. Even if you do manage to get people to join a new city, the personality of the new place will end up so different it’s almost unrecognizable—you can’t clone or move an existing city.

The big difference between physical space and cyberspace is that in cyberspace you can teleport. This makes starting new cities easier, since people can get there and back in two taps. But frictionless transit has its downsides: unlike the physical frontier, which has pretty good lock-in once you get there, it’s much harder to convince people to stay in new places online for long when everyone else is back in the big city.

Of course the ‘internet as land’ metaphor is not new: the idea of cyber ‘space’ has been around as long as the internet, and there are some amusingly literal takes on the idea, like Horizon Worlds and Decentraland. But to project internet activity onto a set of coordinates in 3D space is missing the point of the “internet as land” metaphor. What’s new in what I’m proposing, I think, is the idea that the important thing isn’t to copy the physical properties of meatspace—it’s to use meatspace principles to inform how we govern thoughtspace. 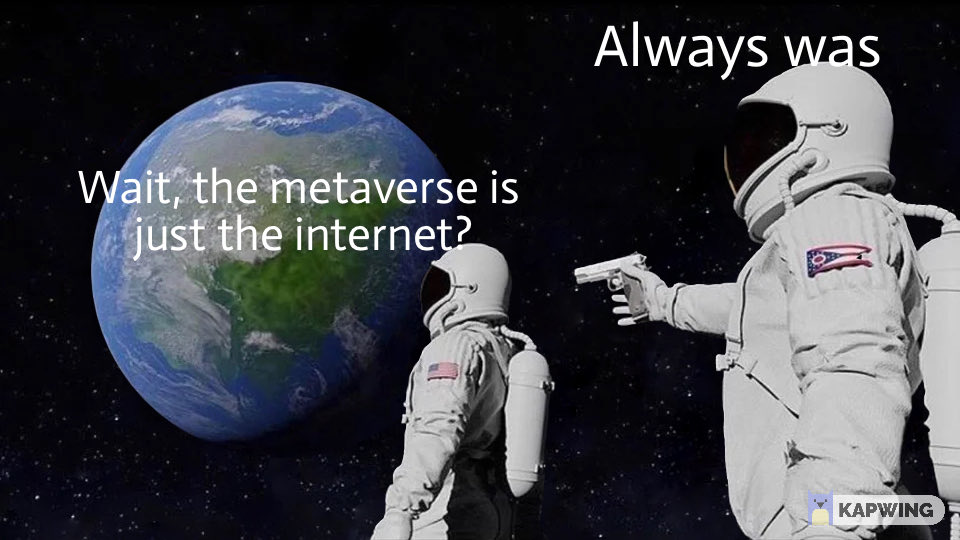 So if URLs are like land, and dense networks are like city-states, then what form of governance is appropriate? Probably not the autocracies we live with today. Most people probably want rulers to be bound by law, enforced by an impartial judiciary, and shaped by democratic legislative principles.

Most of the people who talk about user ownership of networks are focused on creating new city-states based on blockchain technology and egalitarian ideals, but comparatively little attention has been paid to reforming existing networks based on these same principles. I think this is a mistake.

The network effects of cities are extremely difficult to compete with. It’s true that new cities are born all the time, but old cities tend to stick around once they hit critical mass. Throughout history it’s been more common for people to reform the power structures that govern their territory, rather than seek out new territory altogether. The United States is really the exception, rather than the rule. For every Declaration of Independence breaking away new territory (which, it’s important to note, was not really new and was certainly not unoccupied) you have several equivalent documents reforming existing territory: Britain had the Magna Carta, France had the Declaration of The Rights of Man and of the Citizen, ancient Rome had the Twelve Tables. In each case, rulers lost the confidence of the ruled, and were forced to accept limitations on their power.

Why? The forces that cause revolutions are the same then as now. The Magna Carta was signed because a bunch of English Barons were pissed off that the taxes were too high and they were being disrespected and imprisoned by the King. This reminds me of the group of Barons that are now taking over Twitter to bust their friends out of internet jail! This is an extremely costly effort, which speaks to the power of Twitter’s network effect. It’s not so easy to start a new city online. Not one that matters, anyway.

Another parallel: just as in physical territory, online territory starts out as default autocratic, then only can become democratic through revolt, revolution, and reform. All territory on Earth was once either empty or controlled by some local warlord. Over time as civilizations scaled, warlords became emperors. And then in some places emperors lost control and became subject to rule of law. Democratization of online territory may follow the same pattern.

That being said, there are limits to the metaphor. It would be a huge mistake to copy/paste our obviously flawed forms of democracy onto online spaces.

How should network city-states democratize, then?

There are three core jobs-to-be-done of a democracy:

What would happen if online networks adopted these principles of governance? You can imagine all sorts of interesting configurations. For example, what would federalism look like on Twitter—could the network be split into regions that have some degree of local autonomy? What would happen if Twitter established a legislature? What if you could run for President of Twitter? I could imagine this being a death sentence for the company, but I could imagine it being the best thing to ever happen to the company, depending on how it was designed.

I’m no political scientist, so I don’t have concrete proposals yet for how I think digital land should be governed. But to me that’s ok, because we’re not at that step yet.

First, we need to shift the metaphors we live by in order to make such a conceptual leap politically possible.

In 1980 an incredible book was published called Metaphors We Live By. The basic idea is that our everyday experience is deeply shaped by conceptual metaphors that govern our behavior, our expectations of others, and our perceptions of what is possible.

The point is: different metaphors produce different behavior, which produces different results, some more desirable than others.

Right now the dominant metaphor we use to understand Twitter and networks like it are: ‘companies,’ which are ‘private property’ belonging to shareholders. We’ve seen the results this metaphor has generated: a lot of good, but a lot of bad, too.

Thanks to our Sponsor: Reforge

Reforge is your ally on the career-long journey to mastery. Year-round access to the highest caliber of content and community, plus hands-on, application-focused cohort-based programs, make it the must-join investment to scale your impact and career. Apply to join today.

When I've reviewed the current state of Twitter, a lot of my criticism has been at Elon for stating that he will make Twitter "free speech in that it will match the law." But Twitter already conforms to existing free speech laws in the USA. Nothing Elon is proposing seems workable.

But it is interesting to think about making online platforms actual democracies, with judiciaries.

One thing we don't want is for someone like Elon to dictate those terms (to essentially be an autocratic leader who sets up democratic-like systems).

For a proper exploration of why Twitter is not a public square, the First Amendment was written to restrict governments, not private companies, we need to "imagine [better] spaces designed for democracy," I highly recommend Dr. Mary Anne Franks' paper in the Yale Law Journal: https://www.yalelawjournal.org/forum/beyond-the-public-square-imagining-digital-democracy