This article is brought to you by Matter, a better reading app for articles. It’s designed to help you prioritize, focus, and learn.

If you're a paid Every subscriber you should have access to Lex. If you're still on the waitlist try signing in, or search for an email with the subject line: 'You're in!'.

If you have any questions please reach out to [email protected] and we'll make sure you get off the waitlist ASAP! If you want to jump the waitlist make sure to subscribe to Every:

In case you didn’t hear: on Sunday, October 16th we launched a product I’ve been building. It’s called Lex, and it’s a word processor with an AI built in that helps you unlock your best writing.

The response surpassed my wildest hopes and dreams:

I’m not gonna lie, it feels surreal and amazing. This is clearly an opportunity to do something special, and all of us here at Every are committed to making it happen. (Just in case you’re wondering: yes, we’re going to keep writing!)

This week on Divinations, I’m going to talk about what I’ve learned from building Lex so far, and why I think the launch went so well. I think it will be useful for anyone building new products, thinking through positioning, and planning launches. I’m also going to talk about what’s next for Lex, and how we hope to grow it from a promising new product to an essential tool—and maybe even a pretty good business.

So let’s dive in.

Matter gives you powerful tools in an elegant interface. Connect Gmail to sync your newsletters. Listen to articles in super-realistic voices. Send to Kindle. Highlight fluidly. Sync to your knowledge base. And much more.

Backed by the founders of Stripe and used by a growing number of the internet’s top entrepreneurs and thinkers (including some of us at Every!) Matter is the better way to read on the internet.

About a month ago I decided I wanted a weekend hack project. I love building software and haven’t done as much of it lately.

My first idea was to build a mobile app like BeReal, but with text instead of photos, where it would send out a prompt—like “What’s the funniest movie you’ve ever seen?”—and everybody would answer and poke fun at each other in the comments. I decided not to do this because I felt like it would be kind of like throwing a party with no clear end date, and that would be stressful for me.

Then I thought, “You know what, I use Google Docs every day and I honestly don’t love it. How hard would it be to build something better? Oh, and maybe it would be cool to play around with a GPT-3 integration!” I called my co-founder Dan and he thought it was a cool idea. “The GPT-3 thing is the part I’m most interested in,” he said.

(That Dan, he knows his stuff!)

So I got started building. The great thing about this idea is that there’s no cold start problem: it’s valuable even in single-player mode. I’m an extremely heavy user of word processors, so I have a lot of opinions, and it would be nice to just have something that worked the way I wanted it to.

For example, to start, there are a lot of simple features:

The more I started to let my mind wander down this path, the more excited I got about it. My new routine was to do my regular Every work, then take a second shift at night to program Lex. My wife hung out with her family on weekends, and I’d stay home and code. This is not the way we want to live our lives for very long, but we both felt this was important and warranted a short-term sprint.

Within a week or two I had a usable prototype. I started writing my weekly Divinations column on it. I shared it with Dan, Evan, Fadeke, and a few other folks. The AI wasn’t quite right at first, but we refined it to the simplest possible experience: just type +++, and GPT-3 will give you a few sentences it thinks might come next.

When we first started using this version of the product, it was quickly apparent that it would blow minds.

I have to admit I feel kind of weird about this, because the mind-blowing magic is coming from an algorithm I didn’t create. Anyone can sign up for access to it and build it into their own apps. But then again, it’s the same algorithm used by pretty much every other competitor in the space—many of whom have raised millions of dollars.

What I realized was special about Lex—and this realization only came gradually, over the course of a few weeks—was that it embodied a simple idea that somehow no one has exactly nailed yet: online word processing + gpt-3. That’s it!

If you want to use GPT-3 there are plenty of places to do it, including on OpenAI’s website directly. But nobody yet has an interface that’s a familiar full-featured word processor. Some people are close, but my intuition is they tend to make it too complicated.

A Brief Aside: How New Technologies Get Deployed

The way I imagine it is that it’s as if GPT-3—and, more generally, AI—is an incredibly large source of raw energy just waiting to get channeled into the world, like a giant battery. We’re still in the early days, so that energy is still getting wired up in all sorts of ways. People are experimenting with what they can do with it, but the early iterations are always going to be somewhat inefficient. Over time the dots get connected and power starts to flow through more rapidly, with less resistance.

A great example of this is YouTube. The main reason it got traction is it was the easiest way to upload a video to the internet and get a URL you could send someone to watch. People would embed videos of themselves or stuff they thought was funny to their MySpace profiles, and it took off from there. The thing is, the key technology enabler that let this happen was Flash video—which was released a full two years before YouTube launched! You’d think someone would have thought to build a video-sharing site when Flash announced its new video feature, and, of course, some people did, but nobody nailed the product in such a way that allowed the category to take off.

The lesson is that sometimes there is a lag between a technology advance and the consumerization of that advance. Sometimes the consumerization looks relatively simple, or even like a toy, but still ends up capturing a lot of value. Just think about the simplicity of Instagram or WhatsApp compared to the iPhone. I think something similar might happen here.

We didn’t plan to launch Lex this quickly, but the feedback was so good we decided it was time to just get it out there.

The funny thing is, though, it wasn’t uniformly good. I sent Lex to maybe a dozen people before launch, and there were some people who tried it and instantly “got it,” and others who were way less enthusiastic. I think the general lesson is, if you’re building a product the level of enthusiasm from the people who love it matters way more than if some people don’t. You’d think that would be obvious, but I was a bit worried about it. “Why aren’t 100% of people excited?” is clearly a counter-productive thing to think about.

So we launched! I stayed up till 3am on Saturday night putting the finishing touches on the app, and recorded the demo video. We queued up an email to get sent out to our list Sunday morning, and I readied my tweet. It was so late at night in LA that it was starting to become morning on the east coast. I thought about just tweeting it right then and there, but I was terrified it would flop. So I went to bed.

Obviously we have a long way to go before Lex can be considered a true success, but it’s certainly looking promising as of today. I think there’s a few key things that I want to make sure I do again anytime I’m launching something new in the future:

I know at some level these are all platitudes. I wish I had more time to write an essay today that would make them feel more fresh. But the weird thing is, going through this experience has made me feel like the most important things are ultimately very simple, but very hard to consistently do. All four points above are like that.

We’re going to see what happens next for Lex! The main priority now is to onboard people as quickly as possible and make sure they have an amazing experience. There will be bugs to fix, and features to build. We will introduce paid plans eventually. All of that is on the horizon.

As for Divinations, I’m going to keep writing! This is obviously a huge life moment for me and it will be critical that I take the time to think and reflect each week, and there is no better tool for that than the written word. The writing is going to become more personal and practical, so there’s going to be a lot less of the sort of research-driven deep dives about varying industries, and it’s going to be more about what I’m learning as we build Lex. To start, I’m going to keep most of it behind the paywall because I want it to be as unfiltered as possible and it will be easier to do that if I know it’s only going out to a tight-knit group of readers.

Lastly, all of us here at Every want to thank all of you so much for your support this week. It’s been amazing to see and we are so grateful to be on this journey with all of you.

Thanks to our Sponsor: Matter

Finally, a better reading app. Matter is designed to help you prioritize your content diet, and learn at your own pace. Take your newsletters out of your inbox and follow

What’s more, Matter just introduced a magical new way to share articles with friends in iOS 16. You can now send articles to the top of a friend's queue – using iMessage. It's a seamless hand-off between your reading app and your messaging app.

Watch How it Works
Want to hide ads? Become a subscriber 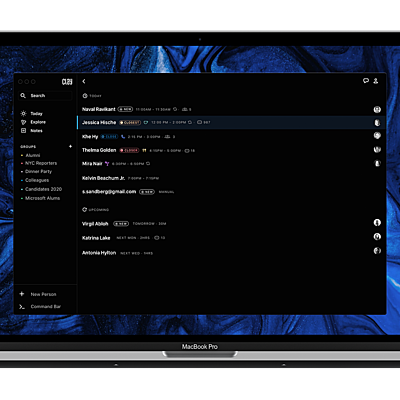 Avishek Banerjee about 1 month ago

The Lex launch gives me more belief in my personal maxim - "Sleep over it" :)

Nika Talbot about 1 month ago

Tam Nguyen about 1 month ago

that’s inspiring! how did you learn to code as a writer?