Validating a Side Hustle

Hi—Dan here. A few months ago Justin Mares explored The Four Kinds of Side Hustles with us, and it quickly became one of the top Superorganizers articles of the year. Today, he's back—sharing how he validated the idea for a side hustle that eventually became Kettle & Fire one of the most successful bone broth companies in the world.

It’s 2014. I’m sitting in my HR rep’s office, resigning my 6-figure job. Two weeks later I’ll be out of the workforce, officially unemployed.

Because in the month before I officially quit my job, I had systematically tested—and proven—demand for the idea that would become Kettle & Fire: a shelf-stable, organic bone broth company that now does well north of 8 figures a year in revenue. In the years since I quit my job, I’ve raised ~$20M to expand Kettle & Fire, and gotten the brand into 10K+ retail stores.

I did this without any experience in the industry, and, in the beginning, without a product. I did this with the expectation that the company would be a small business that would maybe make six figures in annual profit.

Without any experience in the industry, and without a product, I was able to turn an idea into a side gig into a highly profitable company. I’m going to show you exactly how I tested and validated that idea.

Since roughly 2010, I’ve been what I’d call 90% paleo: I usually eat according to a very strict diet (no grains or sugar, minimally processed foods) but have the occasional cheat day. 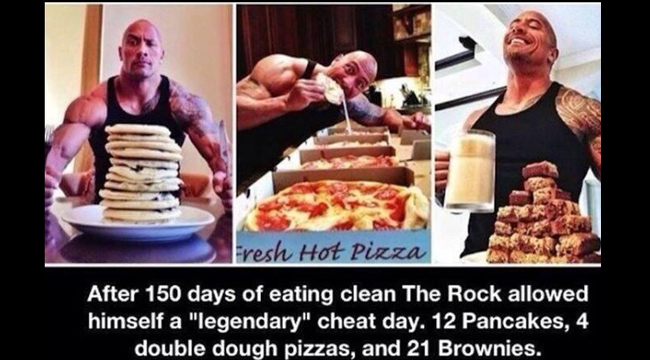 Never quite this bad

By 2014, I’d been hearing a lot of buzz about bone broth from friends at my Crossfit gym. I’d read about the many benefits of bone broth for skin, gut, and joint health, and was excited to try it.

The problem was… I couldn’t find it anywhere. Making it yourself requires a slow cooker and 20+ hours per batch, not to mention time and money to source grass-fed bones. The only stuff I could find online was frozen and had super high minimum order sizes. I didn’t have the time or the money for these options and figured there had to be others out there like me.

Thus the idea was born for the 1st shelf-stable bone broth. One that could become a nice little side business, and I could help people improve people’s health—and my own—at the same time. Win win!

Now all I had to do was test the idea.

Typically, the next step after having what you think is a great idea is to create a product and introduce it to the market for beta tests. If I’d gone that route, it would have gone something like this:

But I had a different idea. I wasn’t that worried about whether I’d be able to make the product or find suppliers. But what I really wanted to know was whether it would be worth the effort.

So the first questions I asked were:

Both of these questions are critical when testing and validating an idea. If you don’t have enough potential customers, obviously that’s not going to work. And if you have a customer segment that wants something but not enough to pay for it, that’s not a business either—you have to identify whether this is a pain point that enough people are willing to spend money to solve.

Question #1: How many people want this product?

To answer question 1, I looked at places where lots of paleo people hung out. Community sites like PaleoHacks and blogs like Mark’s Daily Apple all mentioned bone broth and its health benefits, while Google Trends showed some decent (and quickly growing) interest. 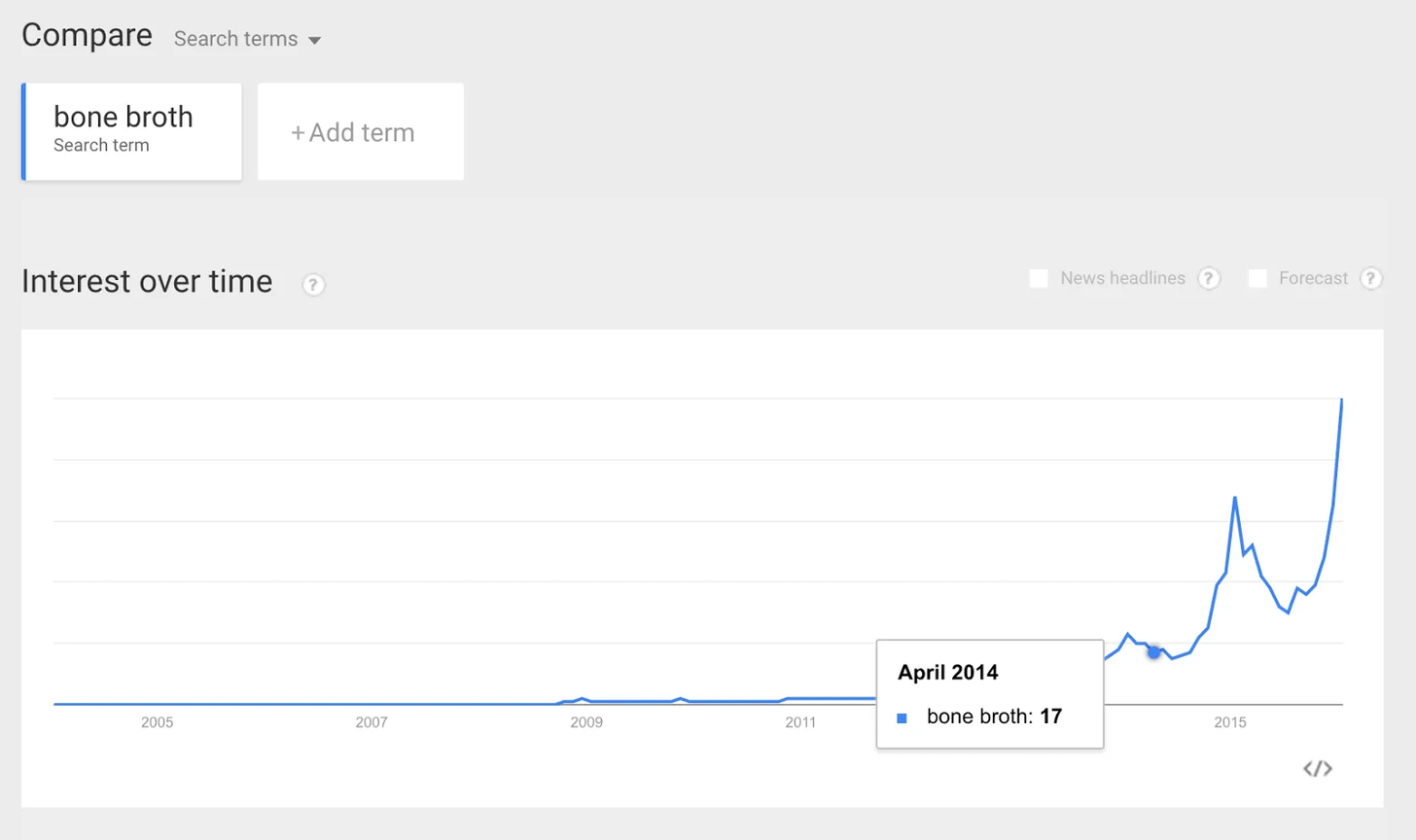 Plus, just by being a member of the community, I knew that it was something that many Paleo people were talking about.

On top of that, I took a look in the Google AdWords Keyword Tool and saw that several thousand people per month were searching for a product that nobody was selling… bone broth.

This was enough for me, and I concluded that there were enough people—at least several thousand—who were looking for this product that I could make a business of it.

Question #2: Will people pay enough to make this a meaningful business?

To answer question #2, I bought the domain “bonebroths.com,” had the stroke of genius to name the company Bone Broths Co. (reader, this was an awful idea), and set up a VERY basic landing page using Unbounce. 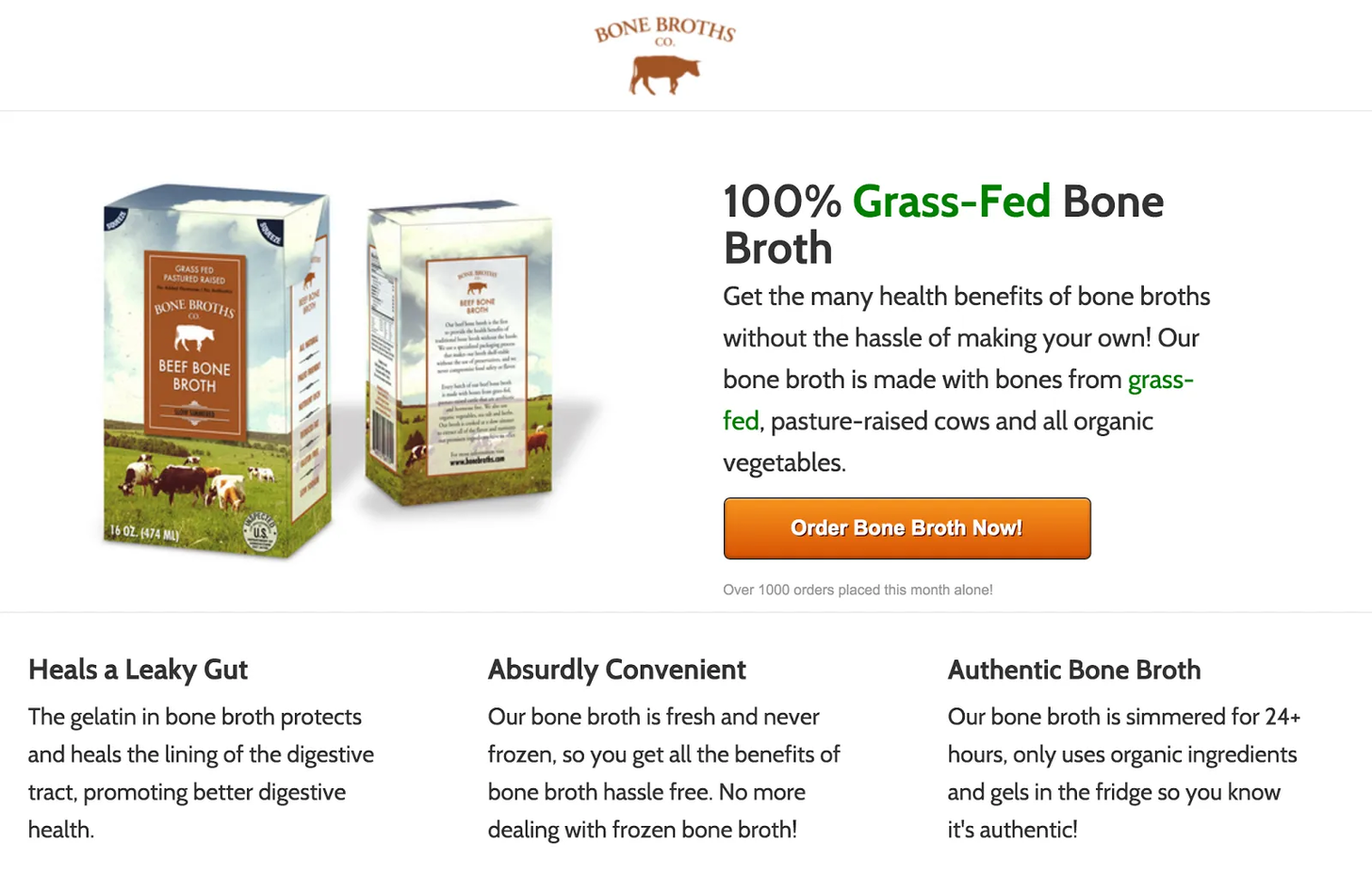 I also paid someone on Fiverr to come up with a very simple logo, for $5.

In my mind, this added an air of legitimacy to a very, very simple site. I wanted to make sure that if people didn’t buy it was because they didn’t want the product—not because they thought they had landed on a scam site.

After setting up the page and writing the copy, the next thing I did was set a price. I figured that I could easily sell bone broth at a profit if I charged $29.99 for 16oz, and I’d be able to see how badly people wanted the product. If they were willing to pay nearly $30 for 16oz of a product they’d never touched, tasted or smelled… this was probably a good idea.

Again, this was all very basic. Literally, this was the flow for someone coming to the site:

It was a UX designer’s worst nightmare. But, after buying about $50 worth of Bing ads, people were actually coming to the site and PayPal-ing me money!! 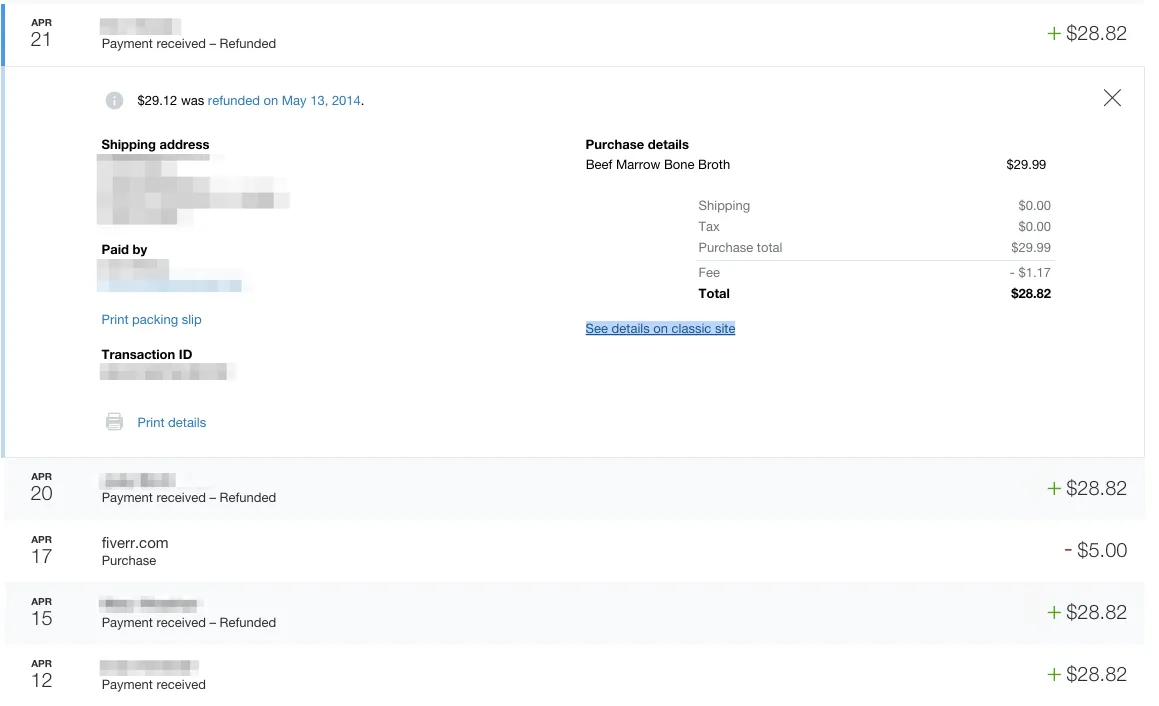 Without a product (though customers didn’t know that)—and with the world’s sketchiest checkout flow—people were actually converting!

What’s more, the number of people clicking the Order Now button on the Unbounce page was insane: 30% of people who hit the site from a cold Bing ad ended up buying:

To me, this validated that enough people were compelled by the offer that—even if they were scared off by the janky checkout flow—this was a product they wanted.

Not only that, but over the course of my test (that lasted 2 weeks), I netted nearly $500 in revenue.

Perfect. So, I’d had an idea, tested it, and validated it. Of course, I didn’t actually have a product! So what did I do next? Emailed every person who had ordered.

I’m the founder of Bone Broths Co. I wanted to reach out to say I’m really excited you ordered our bone broth. However, we don’t have the product in stock at the moment. So, I’m happy to refund you in full, or give you a 50% discount and we’ll ship in just a few weeks.

Bam. No customer complaints, everyone was happy. Those few customers who didn’t answer, I took the liberty of refunding them.

But most of the customers decided to take the 50% off deal, and we were in business!

All we had to do next was 4+ years of work building the company, operating, sourcing, and fulfilling the promise I’d made to customers years ago when I tested the idea. But there you go. What’s become a very real business started with some online ads and a terrible landing page–and a tested and validated idea.

How I’d do this today

I know what you’re thinking—“Justin, that’s a great story, but you did this in 2014. The times, they have a-changed! Nobody uses Bing, and your landing page is embarrassing. Nobody would fall for that today.”

Well, dear reader, you are correct. I would indeed do things differently today than I did seven years ago.

That said, the principles of how I validated Kettle & Fire remain the same. In fact, a few years later, I followed a similar path when validating the idea for Perfect Keto, another brand I co-founded.

Most failed side hustles fall into two categories: they’re either a good idea attacking a miniscule market (chew toys for pet giraffes), or they fail to solve a big enough problem that someone will pay you money for what you’re offering.

The method I describe above for how I validated K&F ensures that you answer the two most important questions in side hustles:

If the answer to both questions is a resounding “yes,” it’s highly likely that you will have a successful side hustle on your hands—or an even bigger business. If I were validating a side hustle idea today, I’d be sure to focus 100% of my energy on answering those two questions.

To answer the 1st question—do enough people want this product (or have this problem) that solving it will be worthwhile—I’d focus my energies on a few areas:

If I had done a bit more of these things, I wouldn’t have been so surprised that the business turned out to be a lot bigger than a side gig.

I’d also consider doing some other things to validate market size and interest, like emailing influential folks in the relevant space and asking their opinion on your idea, sending the idea to a friend or co-worker for feedback, and even potentially buying a report on the state of the market you’re looking at.

Once you have answered the 1st question, it’s time to put your money where your metaphorical mouth is and answer question #2: will people pay me to solve their problem?

This is where many businesses fall down: an idea sounds great and all, but as soon as you ask someone to pay you for it, the whole thing falls apart.

Your goal in addressing Big Question #2 should be to definitively answer that yes, people will pay for you to solve their problem.

If I had a similar product idea that consumers were going to buy today, I’d create a landing page and pre-sell it just like I did for Kettle & Fire. I’d create a landing page on Shopify or Unbounce (much like I did years ago), but would put a lot more energy into the design and layout of the page, using tools like Upwork to find a designer, or just leveraging Webflow or one of Shopify’s many design templates.

I’d also likely use AdWords and Facebook ads to drive traffic to the initial landing page, rather than just Bing ads. That said, the principle would stay the same: I would not want to launch a side hustle without having some set of consumers paying me to solve their problem.

One note: if you’re not selling a consumer product but are instead selling a service, I’d replace “buy ads and drive traffic to a landing page” with “email the individual who experiences the problem you’re solving, and pitch them on how you’re planning to solve their problem.” If you email 50 people, and you’ve identified a real problem they’re experiencing, you should get 5-10 of them on the phone to discuss your proposed solution. And in this case, I’d try to get them to commit to pre-purchase lifetime access to the solution you’re selling.

At the end of this process, you should have tested an idea, seen some validation, and are well on your way to building a successful side hustle. Godspeed.

Note – this post originally appeared on Justin's newsletter The Next Brand.

Thank you for this Post. Everyone is posting about how to do this with online education and content creation, and it’s nice to hear a normal story.