With military precision, the painter Brian Rutenberg wakes up every single workday at exactly 7:10am. Then, the ritual begins: a series of daily tasks, guided by muscle memory and the power of his immutable routine. He arises and makes his bed, then twenty minutes at the gym, followed by oatmeal and coffee at the same diner, every day.

Then he heads into his New York studio, where churns out some of the most well-regarded abstract paintings in modern art. Every day. On time. For decades.

You'd think if his output is as consistent as clockwork, his creative process would reflect that too, right? Wrong, my friend. Wait till you see the pictures of this studio of his—Oh, by The Divine Sweet International Lamp-Lighting JEEBUS.

Calling Brian Rutenberg’s studio ‘a mess’ would be generous, even fussily genteel. ‘Unholy dump’ would be closer to the mark. If Shakespeare or another of our great poets had seen it, he might have called it ‘a festering hellhole’.

Here in this festering hellhole, Rutenberg steps over greasy mounds of discarded paint and heaps of paper, garbage, and assorted shit to reach his desk, where he deals with daily to-dos by taping his notes onto a rickety old revolving lampshade. When he gets down to the actual work of painting, he snaps his paintbrushes in half—they’re ‘an extension of my fist’, he says—before he uses them to smear wads of oily paint across expanses of canvas.

And he doesn’t make ‘art’, by the way—he makes things. Because art is a lie, he says.

But art will also save the world. He says that too.

I stumbled across the fascinating bundle of contradictions that is Brian Rutenberg somewhere in the early days of the first lockdown, when a friend sent me images of his incredible paintings—the luminous and vibrant colors were soul-medicine in the drab bleakness of early Covid. The first thing I found out about him is that he is reckoned to be one of the finest American painters of his generation.

As my interest in the guy grew, I found his riveting (and hilarious) YouTube channel. Then, I got hold of his best-selling book Clear Seeing Place, too. His videos and book are a distillation of his thoughts on how to be a painter—a manifesto in poetic prose.

His work and his words started out as a welcome diversion from the pandemic and all the other anxieties available to the modern consumer—but they soon became inspirational guiding lights for me in my own privileged personal process of pandemic-induced self-reëvaluation.

The closer I looked, and the more I learned about his approach to work, the more I was able to understand both the routine he keeps, and the messes he makes. There are intense moments of accumulation and clutter and filth, yes, but surrounded by space—space for work, for reflection, and for painting.

You see, it turns out that Brian might well have thought more about the stuff we’re interested in at Superorganizers than anyone we’ve ever profiled. From how he structures a day in his life, to how he works with purpose to satisfy the rigorous demands of his relentless year-in year-out schedule of shows, to why a sense of purpose is infinitely more powerful than any amount of inspiration.

He knows what he’s doing, and why he does it—and he knows damn well how he’s going to do it, too. And, crucially, he knows how to talk about it, in fluent Rutenberg:

‘All the talent in the world is meaningless without an atomic work ethic.’

‘The only way to be a painter is to make paintings. That means not doing other stuff.’

‘Life’s only commodity is time. How will you spend yours?’

Maybe you already know who Brian Rutenberg is; hell, you might even have a Rutenberg on the wall of the bathroom where you now sit, enthroned, thumb-scrolling through these words. Or maybe you can’t tell cadmium orange from a navel orange—or couldn’t care less whether phthalocyanine is a shade of blue or the most efficient poison to eternally silence your neighbor’s yappy little dog.

Either way, join us as Brian Rutenberg invites us into his New York studio and tells us why painting is, as he says, ‘this thing that keeps calling him back—like an animal demanding to be fed.’

Be careful where you step, though, and make sure not to touch anything—honest to God, there’s crap everywhere.

Being a painter was never a choice for me.

Since I was about 10, I’ve been able to draw whatever was in front of me. I don’t mean that I could make academically polished drawings at that age, but I had an innate ability to render the three-dimensional world on a two-dimensional surface. Even then, I saw the world as shapes and colors, which made it easier to draw and paint shapes and colors. It’s also a valuable skill to have at boring dinner parties.

But in addition to representing what I saw, I could also summon imagery from my imagination, and draw it too. I somehow had the ability to tap into what’s visible and what’s invisible—and I figured out that I was good at it. While my friends were outside playing basketball, I was alone in my room doing what every young man does: making classical drawings.

Today, I describe myself as ‘a landscape painter born and raised along the coast of South Carolina, who lives in New York City.’

A schedule is the only thing a painter can rely on.

My entire philosophy of how I organize myself as a working painter can be summed up by something George Carlin said: “Just keep movin’ straight ahead. Every now and then you find yourself in a different place.”

Day after day, decade after decade, I show up at my studio and hack away at that gigantic slow-moving iceberg that sits in the middle of the floor. If a piece breaks off, I get a painting. I think of it very much as a 9-to-5 job, not a ‘creative vocation’, and not really even as a ‘career’. It’s just sheer persistence.

Creativity is born of limitations, not freedom.

My limitations start with my routine. In the morning, I wake up at exactly the same time every day—7:10. I sit up on the bed and I don't do anything—I just sit there and wait. Every time, without any conscious intention, I stand up, go brush my teeth, and start my routine.

A painter must trust muscle memory: do first, think second.

After I get dressed, I make the bed. It’s important to start the day with some task that has a beginning, a middle, and an end. I go to the gym for twenty minutes and then I head to the diner to meet my actor buddies for oatmeal and coffee. We talk about life as artists in NYC, being parents, and whether to eat a slice of pizza flat or folded (I fold).

I get to my studio at 9:45 or 10. I usually do paperwork at my desk—I have admin work and correspondence to deal with, like any creative person. From my desk, I can see my painting wall: 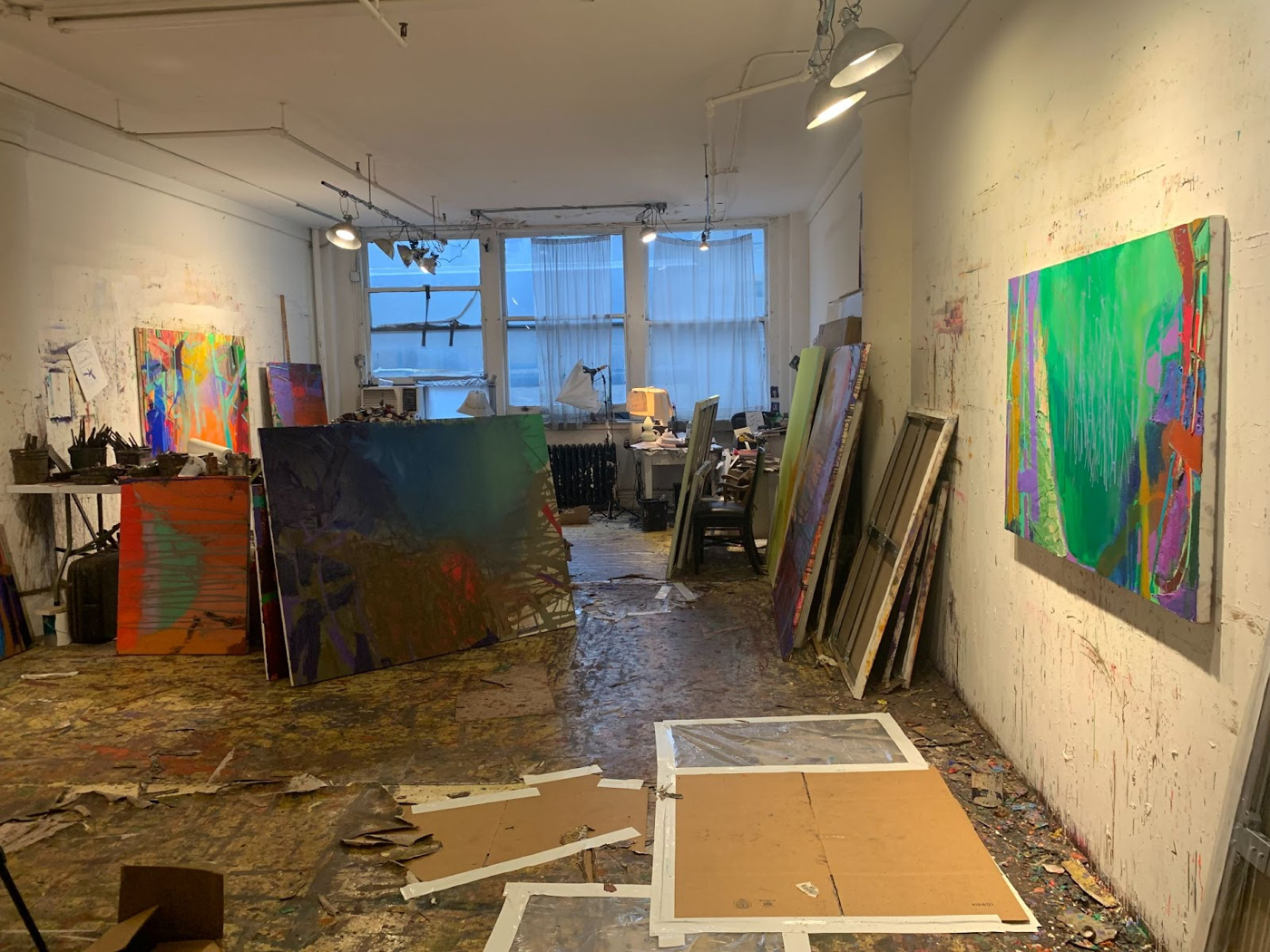 I’ll look up intermittently at whatever I was working on the previous day, and that’s when it becomes clear to me what direction my work will take for the rest of the day. Just like getting out of bed, I trust my muscles to do what has to be done.

I take lunch at about the same time every day, 12:45, and it’s always the same thing for long stretches of time (lately it’s shrimp pad thai and Thai iced tea, in case you’re wondering). After that, if all is going smoothly, I’ll paint until 5:30 or 6, and then go home. I’m a family man. Weekends and evenings are for spending time with my wife and kids.

When I get blocked in my work, I just quit.

I used to think that the best thing to do when experiencing a painting block was to put my head down and try to push straight through.

Now I try to think of the word ‘block’ from a different angle. A colon gets blocked; an artist has dry spells. A dry spell is a good sign: it means you’re working. The only certainty is that you will fill up again—but you can’t force the Muses.