The Unreasonable Effectiveness of 1-1 Learning

How to learn anything 98% better than average

Education is expensive because you’re paying for more than learning. You’re paying for the status of the degree, the ability to participate in the community, a planned course list and curriculum, the quality control that the university provides, and on and on. You’re paying for a turn-key, minimum effort experience.

But if, for some reason, you don’t care about those things and you’re optimizing primarily for learning—you can learn anything 98% better than you would in a class, for significantly less money. The way to do this is through 1-1 tutoring.

I know this because I did it. A few years ago I decided I wanted to write a novel. So I had the author of one of my favorite books tutor me on fiction writing. I made more progress during those tutoring sessions than I had in workshops, classes, and solo learning combined. And I spent far less money on it than I would have spent on an MFA.

You can do this too for the topic of your choice. You just have to put effort into finding the right person, and into working with them. It won’t be an out of the box experience like a class. You have to be willing to bring a lot more to the table than you would ordinarily.

But you’ll learn a lot more than you might otherwise, without spending a lot of money. Let me explain.

I decided I wanted to write fiction in 2016. At first, I thought this would be fairly easy: I’d just sit down and write every day and eventually a great work of fiction would come out. I’d been writing for a long time on the internet so this seemed reasonable.

It turns out, though, that writing fiction is an entirely different beast than writing blog posts. You need to learn about scenes and structure and dialog and character development and plot and a thousand other things. When I realized this it was quite exciting to me; I dove in head first.

I picked up the Aaron Sorkin MasterClass on screenwriting (for witty dialog) and read Scene and Structure and Elements of the Novel and ten other books. I took diligent notes and tried to apply what I read to my writing practice. I got better, and I churned out a lot of pages of material, but I still didn’t make the progress I wanted to.

So I tried a class. As a kid I’d seen the yellow Gotham Writers Workshop boxes around the city: 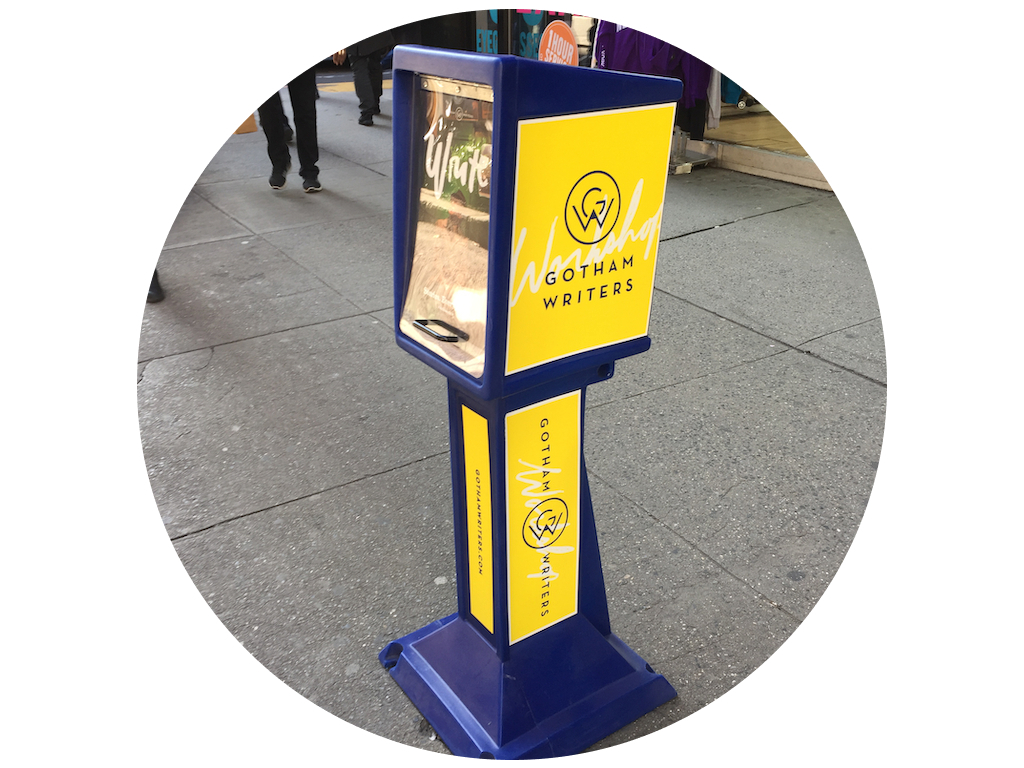 So I signed up for their Fiction Writing I class. This time there was a real live teacher there who had published his own novel. There was a structured curriculum, and homework, and 20 other students to workshop my writing with. I got even better. I did another class.

But I still felt like something was missing. I was in a different place with my writing and my career than the rest of the students, and my questions and problems were different. It’s not that I was better at writing, but I had a set of skills that I knew were lacking and specific problems in the draft of my novel that I wanted to try to solve—and the classroom environment wasn’t tailored to those things.

I thought about doing an MFA, but it seemed really time consuming and expensive. I wanted to get better at writing and to finish my novel, not get a degree. So that’s when I had the idea to try to get an author to tutor me. I had someone specific in mind.

A year or so previously I’d read a book called See You in the Cosmos by Jack Cheng that blew my mind. It was exactly like the kind of book I wanted to learn how to write in terms of character, structure, and voice. I’d talked to Jack once via a friend of a friend, so I had his email.

So, I decided to ask if he’d help me out. Here’s the email I sent: 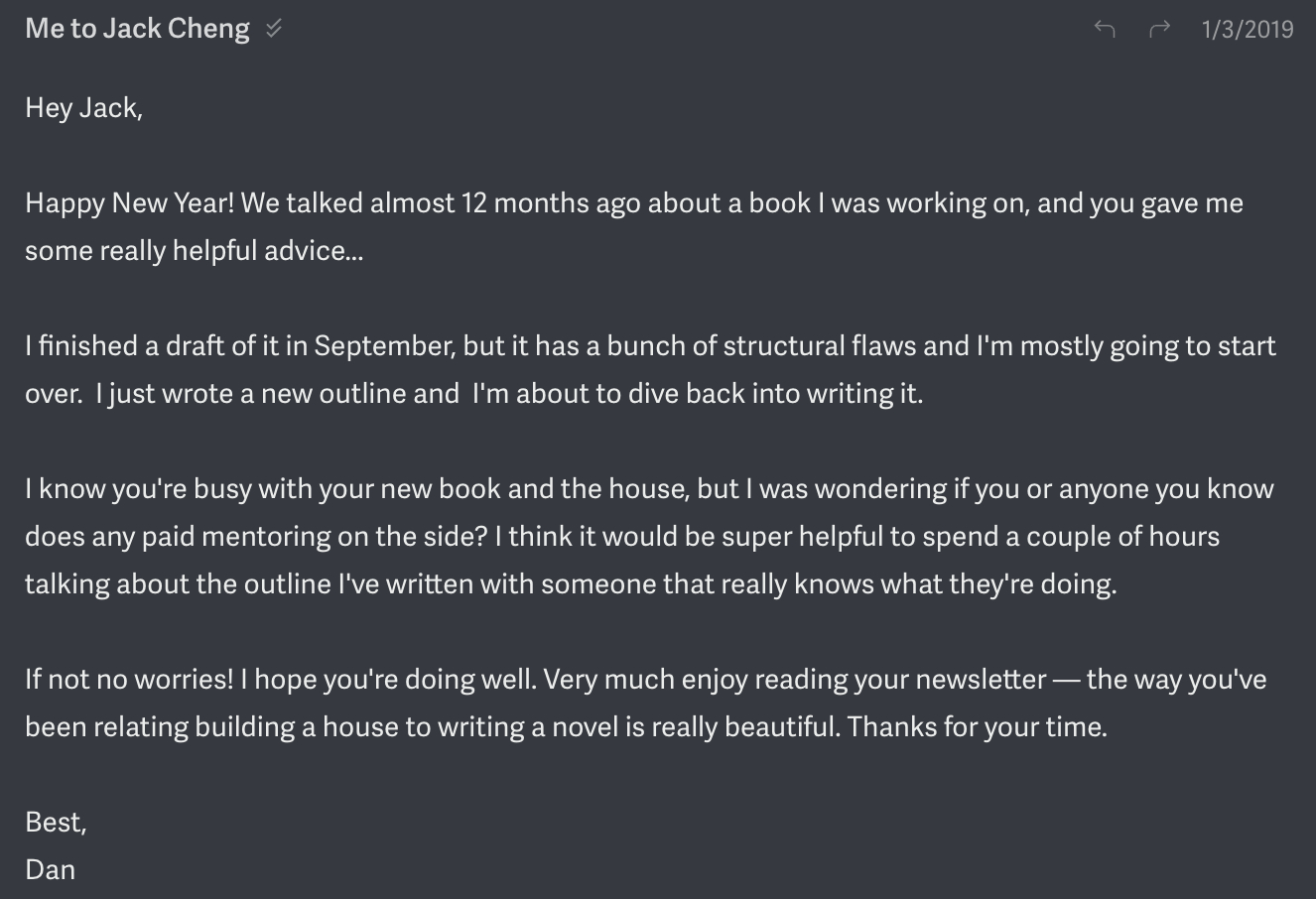 He replied back, and said yes! We negotiated a rate and we were off to the races on my Personal MFA. And as I mentioned, I learned way more about writing—and made more progress on my novel—than with any other method of learning I’d tried up to this point. The reason is simple: I’d already done a lot of work on my novel, built up a decent amount of skill, but I was stuck in a few places and didn’t know how to build skill around them. Jack could help me identify where I was stuck and suggest things to try that would help—and he often solved problems with a few minutes of his time that I had been banging my head against for a year.

1-1 tutoring is extremely valuable, but it’s totally different than taking a class. I had to bring a lot more to the table to get what I wanted out of the experience. When you’re doing tutoring with someone who doesn’t teach professionally they won’t have a course structure or plan. So I had to suggest a structure, bring work in that I wanted to review, identify skills I wanted to build, and follow through by making progress on my own between tutoring sessions.

I learned a lot through this experience with Jack that I think is applicable no matter what you want to learn. So, let’s talk about how to do this, how to structure it, and what to expect.

The rest of this post describes my experience with 1-1 tutoring and gives you a complete 1,000+ word guide to finding and working with a tutor on subjects that interest you. Become a subscriber to read the rest, and to get access to our entire library of essays that will help advance your work and life.