It’s an ingredient called surprise. He wraps it into each sentence of his essays. He gathers it by constant searching, and he searches by echolocation. He throws out his candidates in conversations, and on Twitter at a prodigious, unrestrained clip. He’s looking for ideas and ways of expressing them that raise eyebrows, that generate so many reactions they can’t be ignored. To truly find surprise, it turns out, you have to find it in someone else’s eyes.

If the internet is a Great Online Game, David Perell is one of its grand warlocks. He’s fashioned a career as “The Writing Guy”, writing essays, building a popular podcast, and creating the premier course on writing on the internet, Write of Passage.

He’s a small investor in Every, so of course, it should be said I have some reason to be impressed by him in this interview. But I’m trying not to write hagiography. There are, of course, other ways to write an essay. If you read this newsletter closely you’ll hear echoes of David’s system in the approaches of other writers like James Clear and Robin Sloan. But his recipe is totally his own, and native to the internet. There is much about it that I—we—can learn from.

In this interview we trace the birth of his mammoth essays from start to finish. We discuss how he gathers bits of surprise in his notetaking system, Evernote. They’re ideas from books he reads; they are sentences that will resonate; they are ways of framing that make you nod your head.

We hear how he tries them out in conversation—with friends, with students in his course, with random people he meets at parties. How he tweets them. Irreverently, intuitively, instinctually off-schedule, whatever comes to mind. And we see how the ones that stick and stand out, become his building blocks. When he sits down to write an essay, he has the raw ingredient of surprise at his fingertips, and his task is to harness it to express a larger idea.

Using surprise doesn’t mean the task of writing is easy. It is still difficult to find what he wants to say and discover how he wants to say it. To corral facts, and ideas, and frameworks into a coherent structure that has a beginning, middle, and end. His system for surprising sentences doesn’t make any of that a breeze. What it does is to create a palate for his writing that is built out of brighter flavors that can draw you into wanting more.

He says that when he writes he’s, “looking for the simplicity on the far side of complexity.” In this interview, we trace how he finds it. Let’s dive in!

I'm David Perell, and I'm a writer, a podcast host, and the creator of a writing school called Write of Passage.

I use live conversation to cull and test out ideas

Before I write my essays, I talk through them live in conversation. As I talk, I pay attention to how people react. Are they confused? Bored? Or am I saying something insightful, or surprising?

These aren’t formal interactions that require structure or preparation. Instead I’m talking casually with people in my life whose judgment I trust. These are people I feel comfortable sparring with over a meal, on the phone when I’m out on a walk, or even on my podcast. It can be a family member, an old friend, a co-worker, or someone I meet at a dinner party where we just click. I devote a lot of time to cultivating these connections because they’re people who know how to push my thinking. And they usually exhibit two qualities: a sense for what’s interesting and an ability to ask revealing questions.

As I’m talking through my ideas with them, I’m listening for a few things in how they respond. I have an acronym for this to help me keep track: It’s called CRIBS, which stands for confusing, repeated, interesting, boring, and surprising. When an idea I throw out is confusing, repeated (like something I or someone else has said before), or boring, I move away from it and focus on other lines of thinking. When people find something I say interesting or surprising, I know to take that idea more seriously and dig deeper to get to what’s insightful or surprising. This habit has become so ingrained that often I don’t even notice I’m doing it—I’ve trained myself to have a heightened sense of awareness in conversation to how people react.

Paul Graham likes to say that an essay should meander toward surprise. I take that to heart in my writing, I try to build up surprise because surprise and insight and entertainment are all very tightly correlated. Surprise is also the fundamental axiom of Claude Shannon’s Information Theory. The more surprise is contained in a message, the more information it contains.

Twitter is another way for me to gauge people’s interest in ideas. Some writers are more measured in what they tweet and how they share their thinking. They might only share their own finished work, or other published pieces they find interesting. I’m more playful and experimental with my tweets. I throw out all kinds of tidbits that I or other people have thought up to see what resonates. It can be a quick chart, a drawing, or a simple writing tip I discover while sitting at the computer. The ideas behind the tweets may seem small or incomplete, but there is always a thread of insight that fits into my tapestry of ideas.

I pay a lot of attention to how people respond to these small snippets of insight—much more so than when I tweet a long piece I’ve just published that’s taken me months to complete. It’s nice to get feedback about my larger essays after the fact, but it does less to guide my thinking about new ideas on the horizon.

The snippets require less effort to produce, and I can see right away if they pop. When something really resonates, I might get hundreds of retweets, comments, and likes in a matter of minutes or hours. In some ways, that makes Twitter a more powerful feedback loop than what I get from live conversations. Talking through ideas generates a trickle of questions and reactions, one person at a time. On Twitter, the response to ideas is immediate and plentiful.

For example, I posted this graphic I’d found in my Evernote that explains the fragmentation of academia as measured by citations: 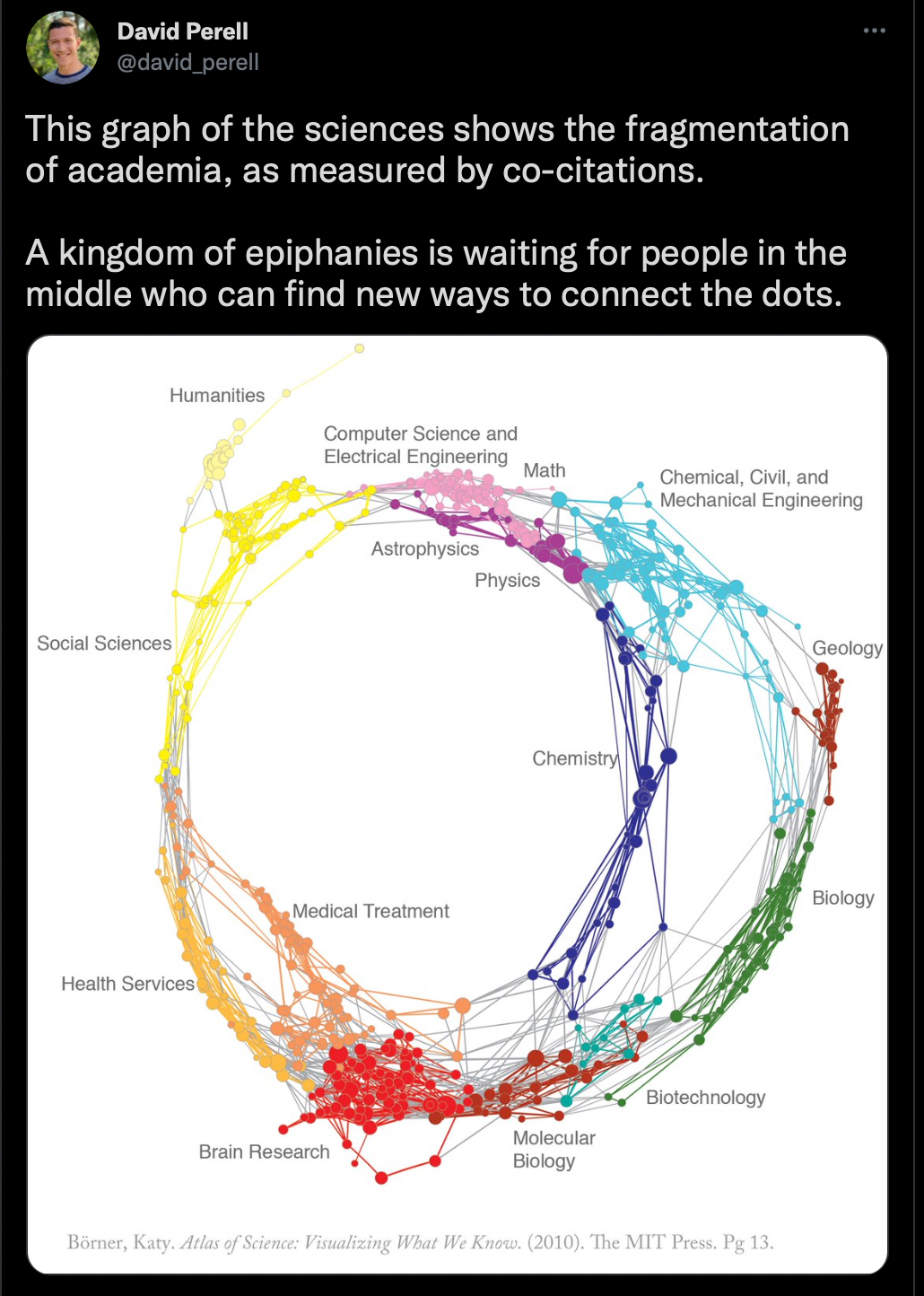 And when I posted it, it popped. It got like 500 retweets. And I said, “you know what I want to use this in some kind of future article—even though I don’t know what that’s going to be.”

It ended up being related to my People Driven Learning essay, and when I wrote it I put it right at the top. And that worked really well.