History doesn't repeat, but it does rhyme

If you’re following crypto at all, then you know it has historically moved in large cycles.

There have so far been three:

It’s easiest to see on the Bitcoin price chart: 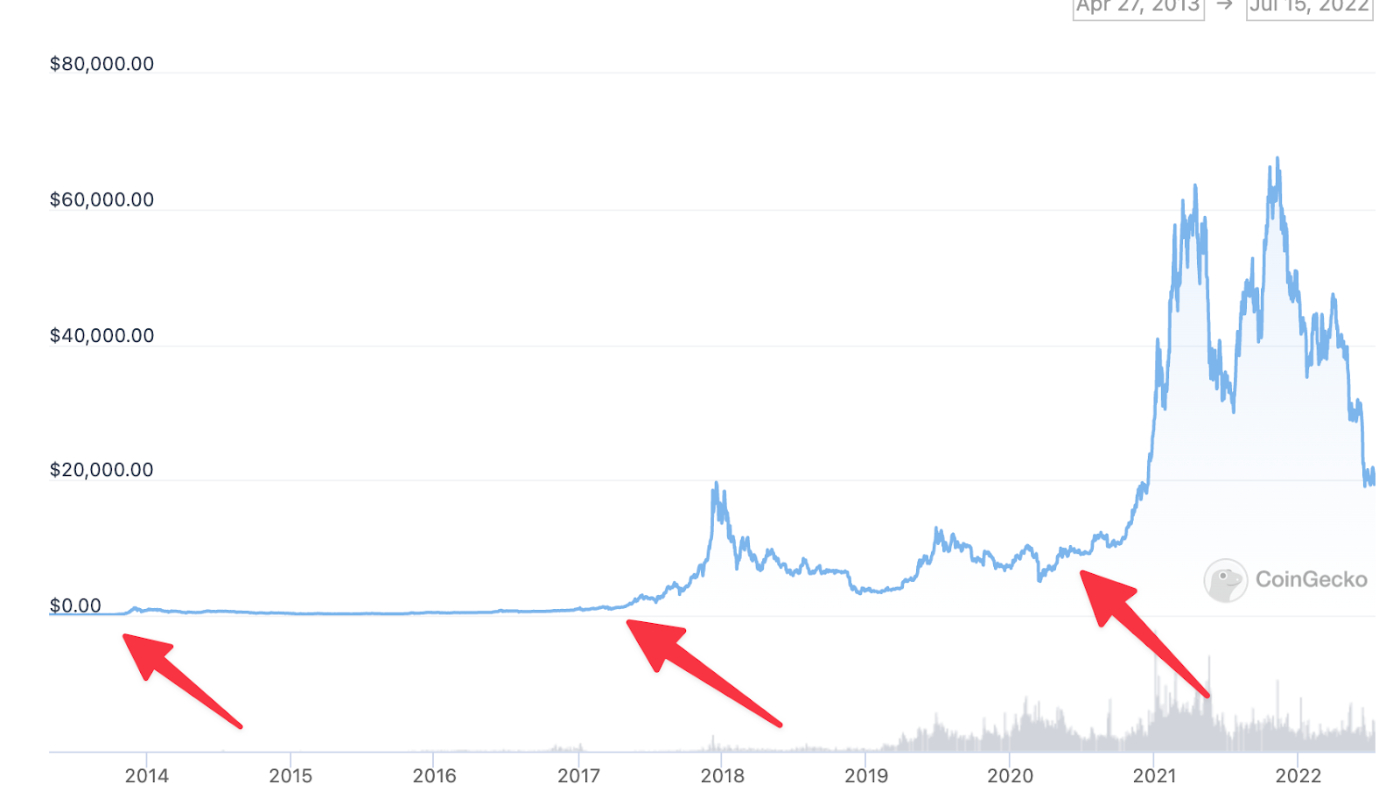 These tend to follow the bitcoin “halving” events, when the block reward issued to miners gets cut in half every four years or so.

But this is just the top layer of the hype cycles. Within each of these “meta cycles,” there are many other hype cycles that occur, and they have so far been getting more diverse with each meta hype cycle.

In the 2013 surge, Bitcoin’s growth was followed by other Bitcoin forks like Litecoin: 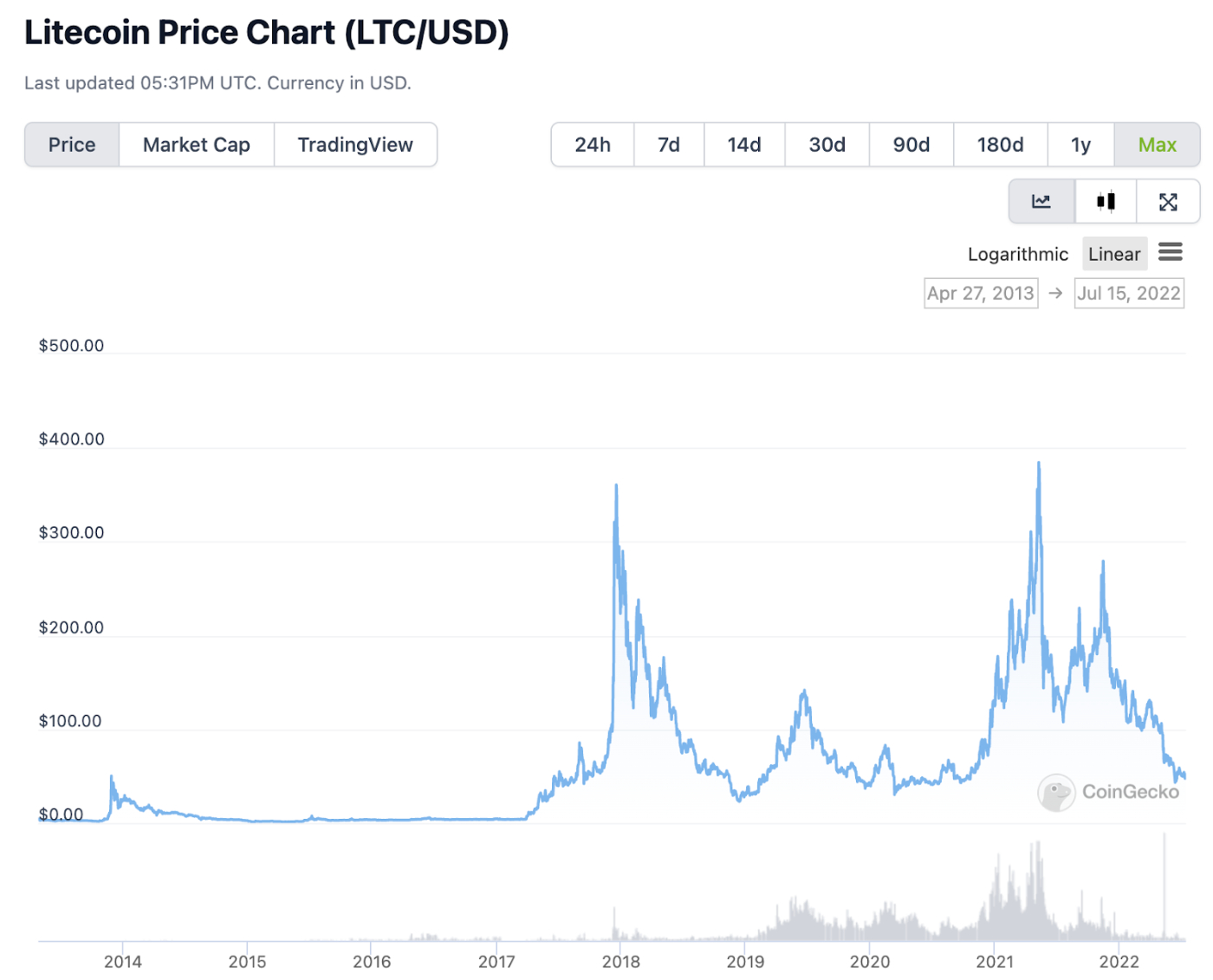 In 2017, there were a new suite of cryptocurrencies that had their own hype cycle. Bitcoin and its forks went through their cycles again (you can see the Litecoin chart tracks the Bitcoin 2017 growth as well), but now there was Ethereum and the rivaling “smart contract” tokens which had their own cycles. 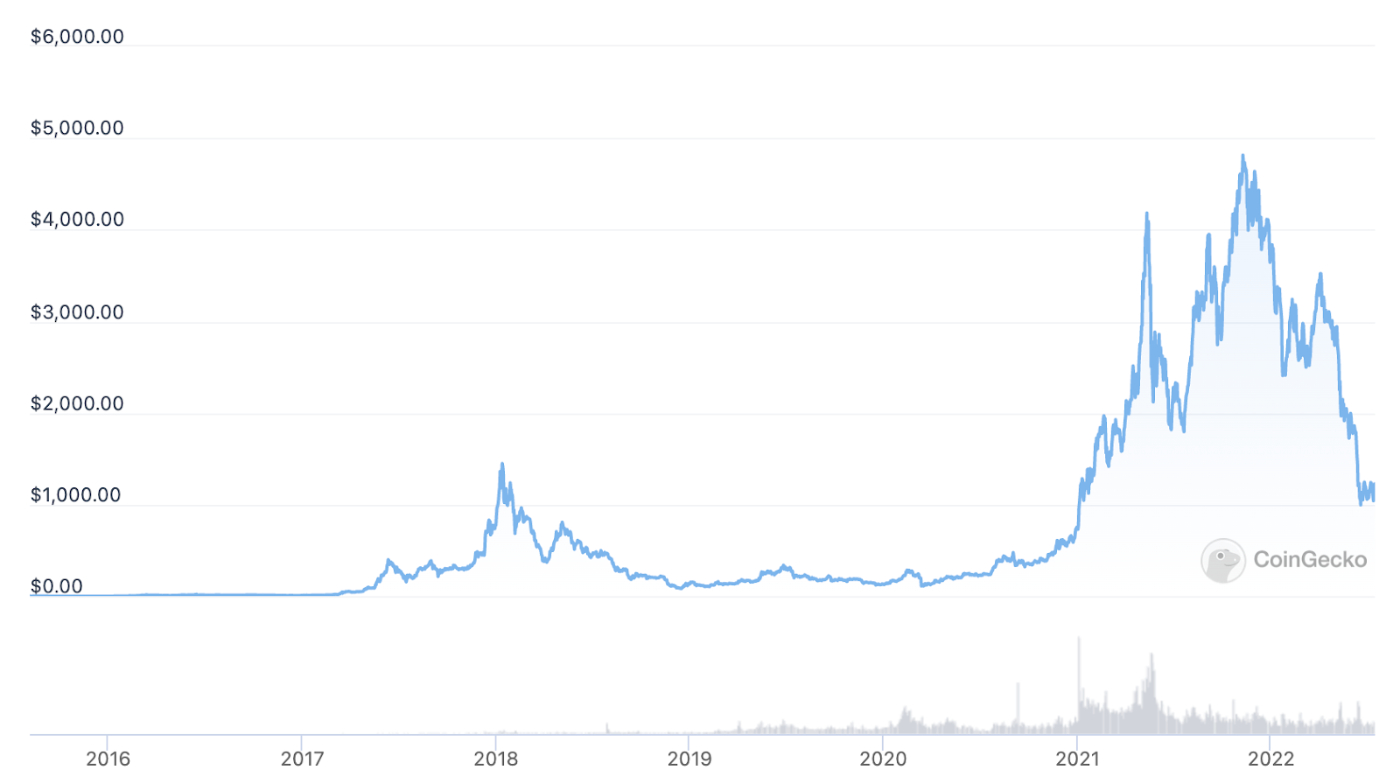 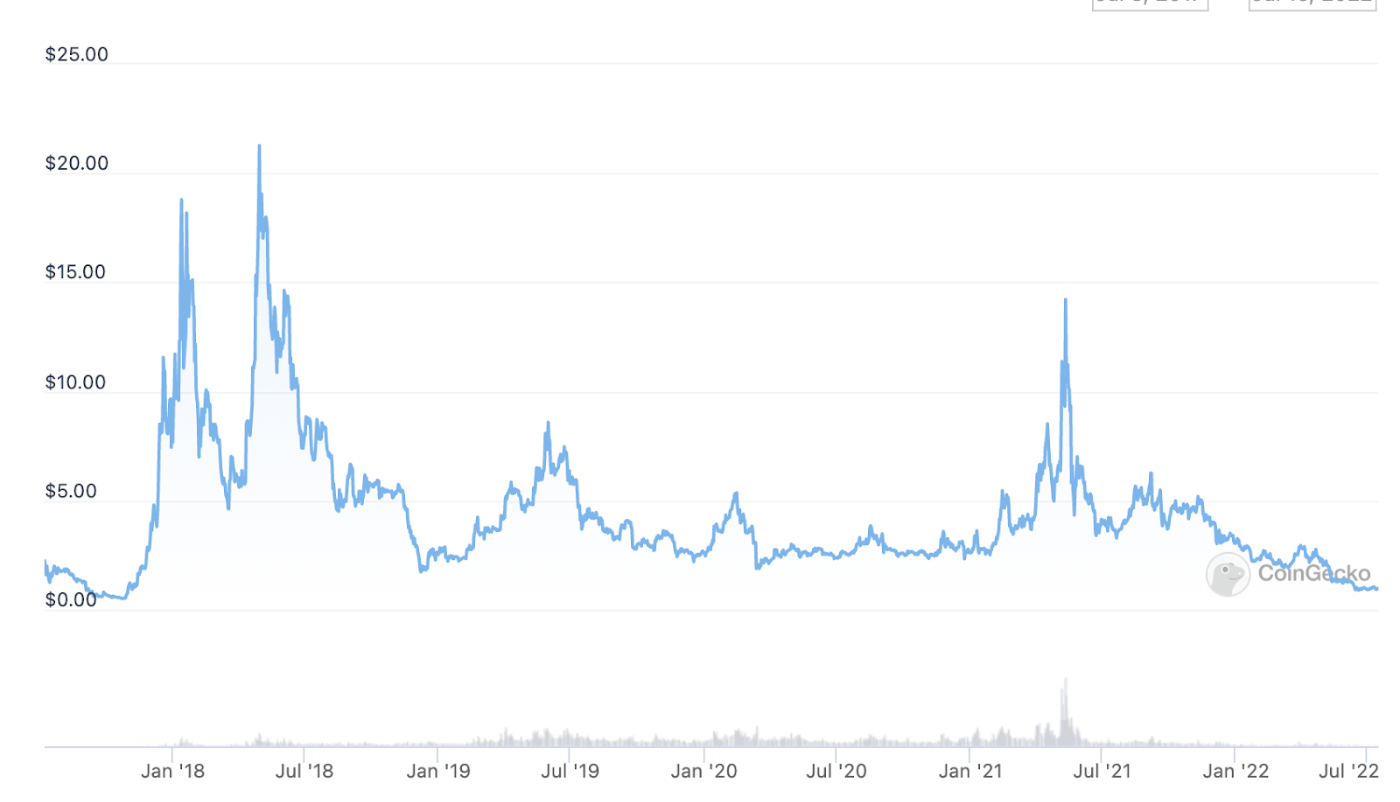 But then within the Ethereum ecosystem, there were another set of hype cycles. The first ERC20 tokens took off, as the hype around ICOs intensified.

MakerDAO launched and immediately shot to a rather high valuation: 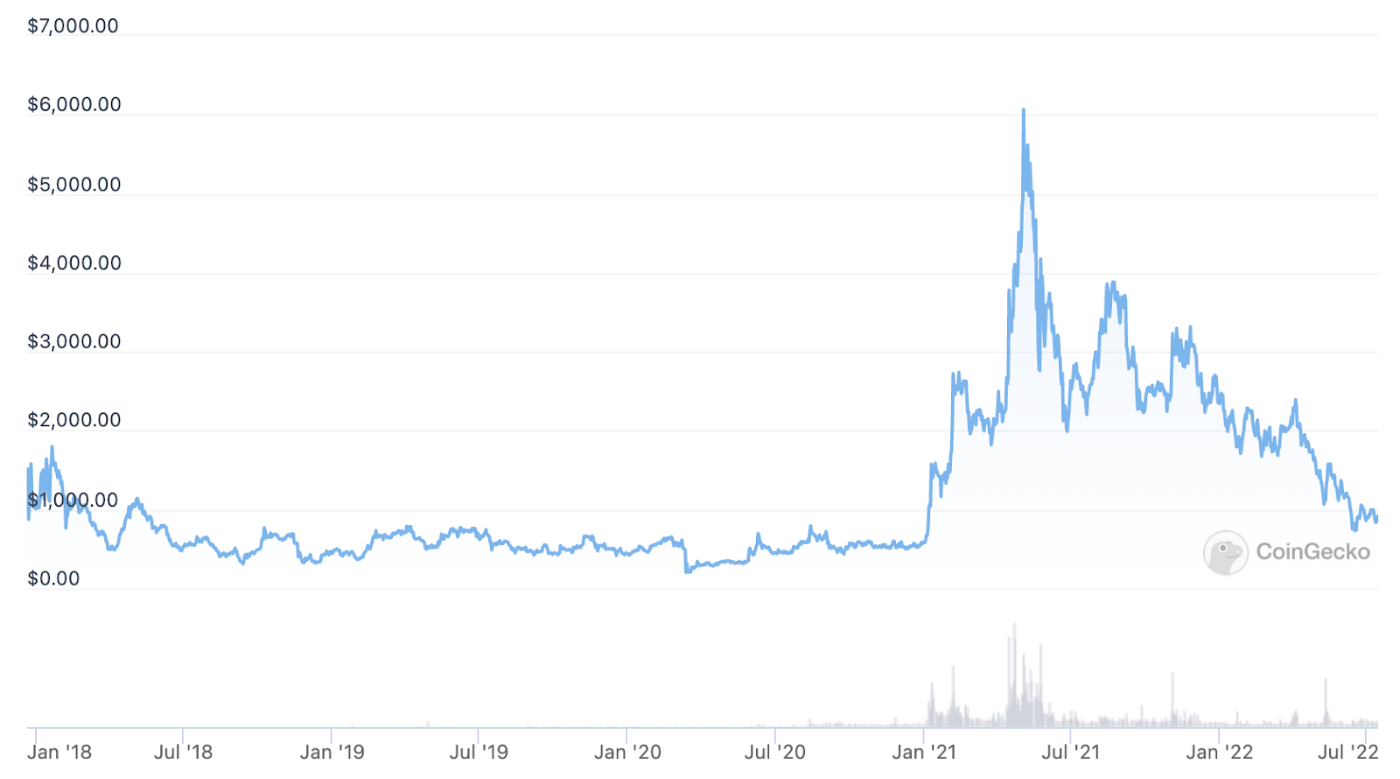 As did Brave’s “Basic Attention Token”: 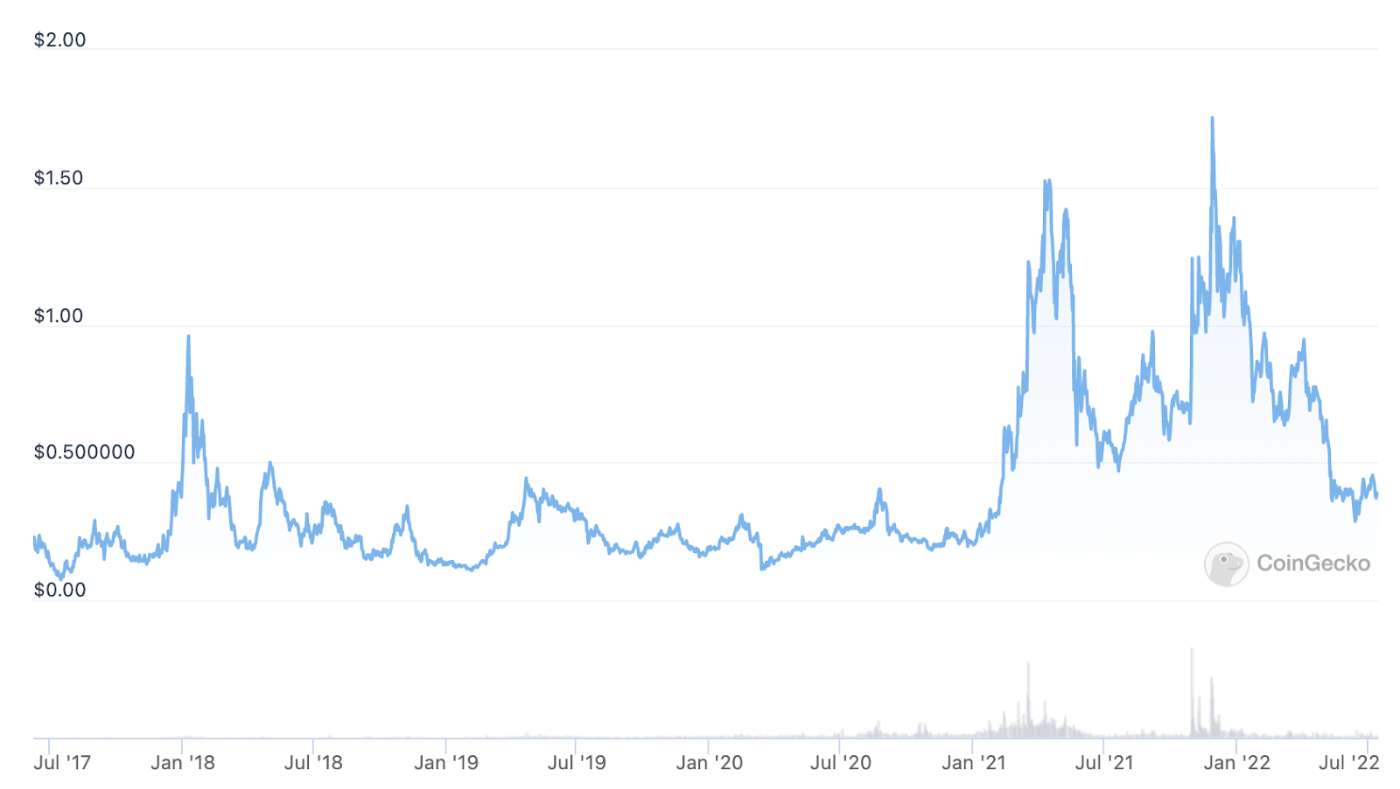 If this was all we knew, then what would we have expected to happen in 2020 when the next surge started?

And that’s exactly what happened. Bitcoin started its run, and then the Bitcoin competitors, killers, or forks followed suit (DOGE oddly being the most notable here).

Ethereum surged, and then it was followed by the “Ethereum killers” like Solana, Avalanche, Cardano (lol).

And new technologies had their own cycles, the big one here being NFTs.

Now, obviously, history does not have to repeat itself. But it often rhymes. And since these manic periods reflect some deep human psychology around FOMO, and have played out in similar ways across most markets over time (though usually much slower), I don’t see any reason they would stop anytime soon.

So assuming they do occur again, how can we prepare mentally for them to make sure we benefit from, instead of falling victim to, their occurrences?

And how do we do it without trying to time the top and bottom, a generally impossible task?

I have a few thoughts. As always, none of this is financial advice, I’m just a pixelated headshot with a blog. And if you aren’t subscribed, make sure you are for the next article!

The Meta Cycle Will Likely Repeat

I don’t see any reason to suspect that was the end of crypto and it’s just going to go down forever now.

The most important metric to me is developer energy. As long as the devs are doing something, capital will flow back in eventually. Especially once people don’t feel scared of inflation, recession, and all the other financial boogeymen on the news right now.

If the meta cycle follows previous themes, then it would likely be kicked off by the Bitcoin halving, which will happen around April 3rd, 2024.

Now that doesn’t mean it will start surging up on that date. There’s typically a lag. The last one happened on May 11th, 2020, and Bitcoin didn’t start to really take off in price until around September. There was a 5-6 month lag before the reduced supply entering the market significantly impacted the price. Though, granted, that could have been impacted by COVID recessionary fears.

But either way, I wouldn’t expect it to be immediate, which means sometime late 2024 might be the next cycle.

There are two big confounding variables here though. First, a potential recession. The entire lifespan of crypto has happened during a 13 year mega bull market, crypto has never lived through a recession or serious bear market, so if that’s what we’re going into then that could radically change things.

Second, the Ethereum “triple halving.” When the Ethereum merge happens, likely in September 2022, the Ethereum daily issuance will drop by three halvings, about 90%. If that has a similar impact on Ethereum’s price as the halvings have on Bitcoin’s price, then we might see an earlier meta-cycle kicked off by Ethereum instead of Bitcoin. I have no idea if this will happen or not, it’s just a possibility.

While I don’t believe much in Technical Analysis, it can be very helpful for seeing where you are, even if it doesn’t actually help tell you where you are going. The main things I like to check are the 200 week, 200 day, and 20 day moving averages. If we see the 20d exceeding the 200d and 200w, and staying ahead of them for a couple weeks at a time for Bitcoin or Ethereum, we might be back in the start of a new meta cycle.

But again, the predictive power here is extremely limited. The important takeaway I think is that the meta cycle will be back, and it will probably rhyme with previous ones.

Within the smart contract blockchain ecosystems, we saw a few different hype cycles:

I see no reason these wouldn’t all go through their own hype cycles again, once the meta cycle is kicked off. And now that they’re all established, they’d probably start them earlier than they did these last two years since people won’t be as surprised by them. For example, it took a while in 2021 for people to realize profile pictures could be valuable. Now we know Punks and Apes could be worth half a million or more, so we’ll be quicker to move on those narratives.

The particularly interesting one here is gaming. It felt like gaming was starting a much larger surge, akin to the Bored Ape surge following Beeple, as we went into the spring of 2022. STEPN kicked it off and there were some other games really starting to take off, but then the whole market puked and the fun was cut short. I’ll be interested to see what happens with gaming next time around, especially since teams will have a few years to build some seriously good games.

One important thing to recognize with these cycles repeating though is that while the big blue chips from this cycle will likely come back in a big way, the laggards who came in later and were scraping the bottom of the barrel will probably never come back.

There was a project in 2017 called “Bitcoin Diamond” that was trying to be a Bitcoin competitor. It rode the hype cycle hard, hit a $4 billion market cap, then after the meta cycle was over it crashed and is now basically worthless: 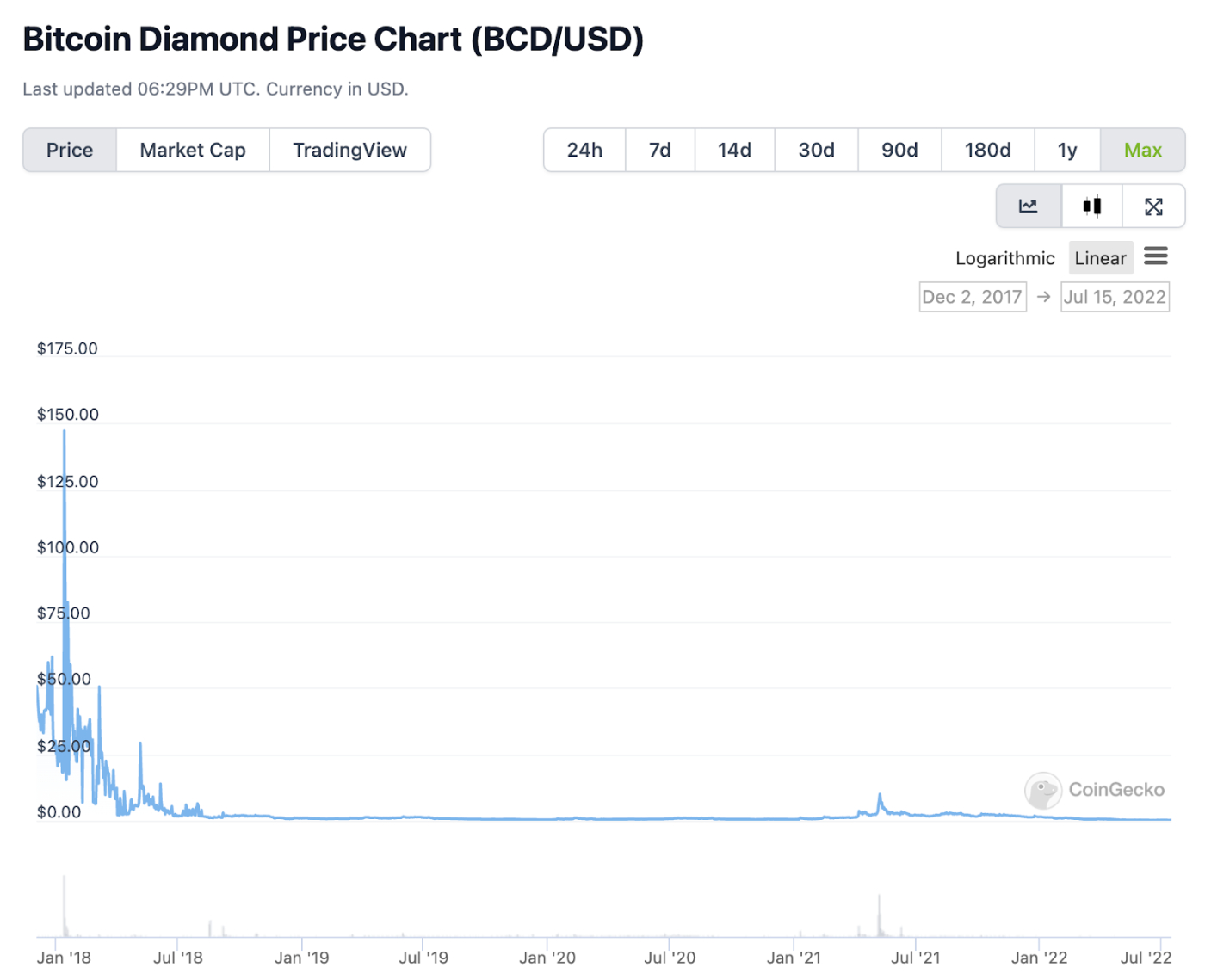 So while tokens like Uniswap and AAVE, and NFTs like Punks and Apes, will likely reclaim and surpass their former glory, it’s very unlikely that all the second and third tier competitors will come back.

People won’t buy the second tier stuff from the last cycle, they’ll buy the new competitors from the new cycle. The potential upside will feel much higher.

There Will Be New Hype Cycles

Last, there will be new technology that comes out with tokens attached that people can speculate on, and speculate they will.

It is almost impossible to predict what these next technologies will be, since they’re going to be new iterations on the existing tech we had this cycle.

But there are ways we can get a few hints. For example, if we look at 2017, there were a couple hints of DeFi but barely any activity. Maker was the big example then. But then in 2020, there were tons of new DeFi protocols and it was a massive speculative area. So if you saw Makers success in 2017, you could ask: what other stuff like Maker might come out next time that I could buy into early? And that could have given you a clue to try things like Uniswap, AAVE, and Curve.

Crypto Punks were also around during the last cycle, and they had a bit of interest. If you were particularly savvy you could have seen that and assumed that digital art would come back in a big way, and tried to buy into it early.

Crypto Kitties was another canary. They had a brief period of serious popularity in the 2017 cycle, which foreshadowed all the crypto gaming insanity in this cycle.

So while you can’t predict the future, there are always hints.

Preparing for the Next Cycle

The easiest way to prepare is to consolidate down to the blue chip, strong teamed projects from this cycle that you are confident will make it to the next one and come back in a big way.

I wrote about what makes that list for me last week, but I’m definitely curious to hear any others.

It could be a quiet couple of years before liquidity flows back into crypto, so you want to make sure you’re only holding on to things that will make it. 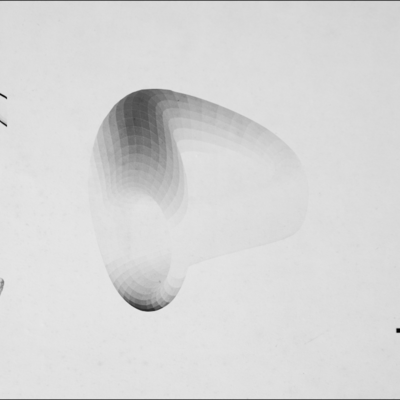 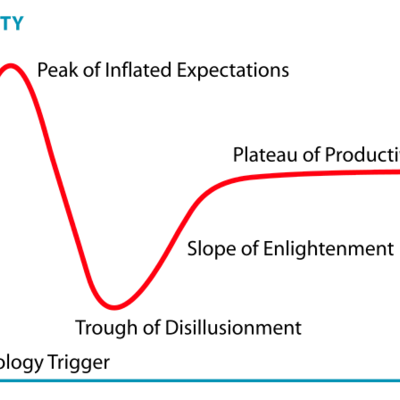 My Crypto Investing Mistakes and Lessons (‘20-‘22)

Surely my decision making will be perfect next time